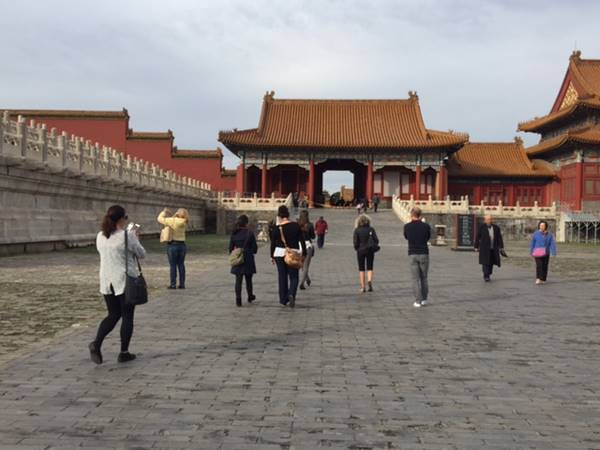 Previously when I thought about Beijing, what I imagined was a dystopian mega-opolis, heaving with dust mask-wearing cyclists. Proletariats laboured their way to factory jobs, breathing in smog and surviving on minimum wage

What I discovered upon arrival was quite different.

I saw landscaping. Miles and miles of manicured gardens, trellised roses separating busy lanes of traffic, and avenues of trees. The Gardening Australia crew would be stoked.

Beijing is one of the most beautified cities I have ever encountered. Clean gutters, leafless streets and happy looking people trundling along on well-designed bike lanes. One of my favourite scenes was a bunch of old men crowded around public chess boards on a Sunday afternoon. It was like the Buena Vista Social Club, except with less music and more nerds.

I wouldn’t go so far as to say that Beijing is beautiful but aspects of it are. Tiananmen Square is really just a big open space. Mao’s mausoleum, while grand in scale, isn’t especially striking (plus Mao Zedong was responsible for an estimated 40 to 70 million deaths through starvation, forced labour and executions so I tend to think he deserved to burn in all seven hells; not get a fancy death house paid for by the public).

But The Forbidden City? Strap on your New Balance, folks. This enormous complex housed 24 emperors of the Ming and Qing dynasties, including the original dragon lady, Empress Dowager Cixi. Walking through this fortified edifice is like being in an optical illusion. It goes on and on and on, with slight adjustments to each new courtyard you enter. The emperor, his advisers and all 3000 of his concubines resided here and governed China. It makes Old Parliament House in Canberra look a bit crap.

The other big attraction for this region is the UNESCO-listed Great Wall of China, one of the new seven wonders of the world. Built 2000 years ago to protect northern China against invading nomads, the Great Wall lives up to its moniker. Located about an hour’s drive from Beijing, there are several sections of the wall you can visit and climb. The main thing to note is that while it’s easy enough to get up onto the wall, the walk itself can be very steep so wear suitable shoes and carry water.

Beijing is also home to the world-famous Peking duck (Beijing was called Peking by the British, but like Bombay/Mumbai, reverted to it’s original name once the British pulled out).

Prepare yourself for an eating marathon if you attend a traditional banquet. In addition to the famed duck, you will be served a selection of cold entrees (marinated tofu, salted cucumber and sliced beef make regular appearances), followed by a seemingly never ending parade of hot dishes including hot and sour soup, as well as a rice dish to ‘fill the corners’ at the end of the meal. By ‘corners’, I can only assume they mean ‘of your handbag’ because these banquets would give even the most glory-gutted American buffet champion a run for their money.

Getting there/staying there:
I flew to Beijing with Air China in premium economy. The aircraft was new, the crew was lovely and the movie selection was decent.

I stayed at the Sheraton Grand Beijing Dongcheng Hotel. This hotel has huge entry-level rooms, an oval bathtub fit for a treasured panda, a sparkly city lights view and excellent food. A very soft landing for a Beijing first-timer.