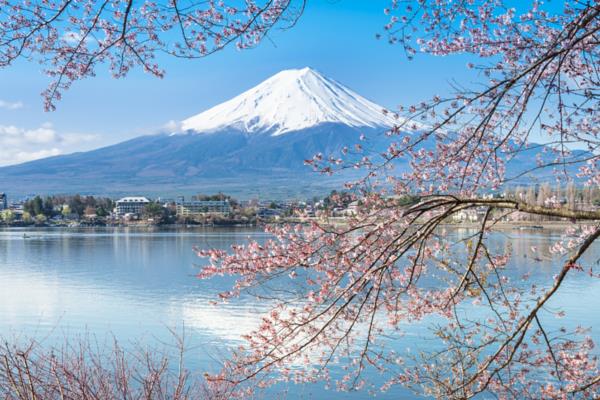 When is the best time to visit Japan? This is a tough question to answer because each month and season boasts something wonderful in Japan. Let’s consider each of Japan’s four main islands and the ideal times to visit each region according to your itinerary.

Best time to visit Honshu
Many of the most famous Japanese cities and attractions are found on the largest and most populated island – Honshu. From the unique blend of tradition and innovation that is Tokyo, to the historically significant city of Hiroshima, Honshu is home to a wealth of Japanese culture, iconic landmarks, and natural beauty.

If you would like to visit the museums and shrines in major cities such as Tokyo, Kyoto and Hiroshima but also wish to enjoy the parks and gardens, then the ideal times to visit are during autumn (September – November) and spring (March – May).

During these seasons you can avoid the uncomfortable heat and oppressive crowds associated with summer. In autumn you will witness the incredibly colourful foliage that adorns many of the city’s popular parks. However, if your goal is to catch the cherry blossoms in all their glory then late March to mid-April is the best period in which to visit most major cities on the island of Honshu. In the map above you can see the start dates of the cherry blossom season in major cities across Japan.

If one of your bucket list experiences is to climb to the top of Mt. Fuji, make sure you book your holiday for summer, as the official climbing season is from early July to mid-September. At other times of year, including the snow season, climbing Mt. Fuji is prohibited.

Best time to visit Hokkaido
In contrast to much of the rest of the country, Hokkaido does not experience unbearably hot and humid summers. This means early to mid-summer are optimum times for visiting the second largest of Japan’s four main islands. Hokkaido is famous world-wide for its lavender season which usually begins in late June and carries through to early August.

Thanks to Hokkaido’s harsh winters graced by lots of snowfall and its untouched nature, this ruggedly beautiful part of Japan is favoured by skiers, snowboarders and lovers of the outdoors during the colder months. If you are on the hunt for that precious deep powder then make your way to Japan’s holy grail of skiing between mid-December and early March. Best time to visit Shikoku
Like Honshu, the ideal times to visit Shikoku are during spring and autumn as the flowers are in bloom and the weather is generally mild and sunny. If you wish to visit the Japan’s oldest hot spring, Dōgo Onsen, you should plan your delightfully lazy getaway for autumn or winter. On the other hand, if you are a beach lover or avid surfer you may prefer to spend summer on the southern coast of this unbelievably relaxing island.

Matsuyama Castle, located in the centre of Matsuyama at the top of Mt. Katsuyama, is renowned as one of the best spots to view the cherry blossoms. From the castle tower you will be treated to spectacular views of the cherry trees scattered throughout the castle grounds. If you don’t want to miss the cherry trees as they transform into a blanket of pink and white petals, be sure to visit between late March and mid-April. Best time to visit Kyushu
If you travel to Kyushu in early spring you will enjoy pleasant temperatures and catch the stunning cherry blossoms. The Fukuoka Castle Cherry Blossom Festival usually begins around the end of March.

Another good time to visit Kyushu is between late October and early November when you will enjoy the vivid autumn hues in parks and gardens across the island.

Autumn through to winter is the best time to holiday in this part of Japan if you long only to soak your troubles away in a thermal spring spa. The city of Beppu, located on the north-east coast of Kyushu, is home to more hot spring vents than any other place in Japan.

Another major Kyushu attraction not to be missed during the colder months is Takasakiyama Monkey Park. The forested park houses around 1,500 Japanese macaque, a species often referred to as ‘snow monkeys’ due to the fact that they inhabit regions of Japan where snow covers the ground for months on end.
One of the best and cheapest ways to visit all four of Japan’s main islands is by rail. The Japan Rail Pass grants you unlimited travel on all trains across the Japan Rail network and selected buses and ferries. There are also regional passes available for Shikoku, Kyushu, Hokkaido and the Eastern half of Honshu, should you want to limit your travel to only one of the islands.