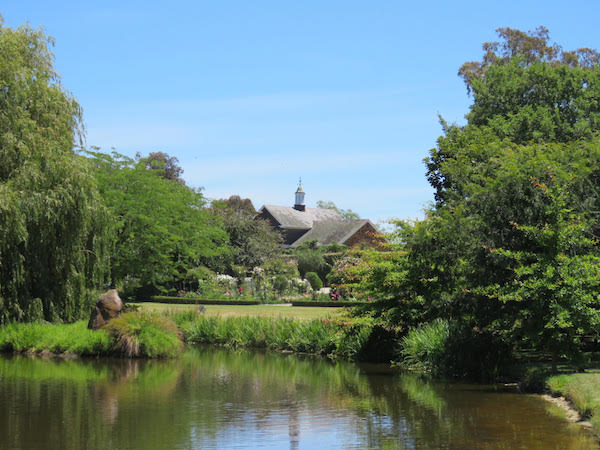 Garden-fanciers are a funny bunch. You will often find them wandering around with leaves in their hair and mud on their boots, inspecting flowers and pinching herbs. So where should these gnome-like creatures holiday? Which gardens of Australia should a plant lover get down and dirty in?

It turns out that the coastal driving route between Sydney and Melbourne offers up some real gems when it comes to open gardens.

From the green rolling hills of Tilba Tilba, to the tree fern forests of the Dandenong Ranges, there’s plenty to look at en route as well. From musk pink bush orchids blooming beside the road, seas of wild verbena and fennel, and tall timber corridors lining the road, the natural world puts on a show both inside and outside of the garden gate.

So swap your gumboots for driving shoes and hit the road to check out these special spots:

This privately owned garden is a work-in-progress 30 years in the making. Home to one of Australia’s best examples of a Norfolk pine tree, the gardens feature a Manchurian pear and wisteria walkway that would be stunning in spring, a function pavilion that overlooks a dam, several ‘follies’ (Victorian-era inspired walls built to look like ruins), as well as an extensive hydrangea and rose gardens. With villa-style accommodation on-site, this is also a handy base for exploring nearby Tilba Tilba village. Entry is $9 per person. If heaven was a garden, Cloudehill would fall pretty close to the mark. With multiple garden rooms featuring water lily ponds, herbs and vegetables, long rows of cottage garden beds, as well as a sunken outdoor theatre, a sweeping wildflower meadow and a glasshouse full of succulents, there’s plenty to keep your eyes – and your camera lens – busy. The gardens are also home to a large sculpture collection that adds a dash of otherworldliness. There’s also a Diggers Club shop and nursery, an on-site restaurant and an adjacent wilderness property that can be accessed from the grounds for a gold coin donation. Entry to Cloudehill is $10 or free for Diggers Club members. This is well worth the entry fee as it is one of the best gardens of Australia. This lesser-known garden surrounds one of the late Dame Elisabeth Murdoch’s houses. Cruden Farm was a wedding gift from her husband. While the homestead is not accessible to visitors, you can explore the gardens simply by calling the number on the website in advance. With a lawn tennis court, stables, a man made lake – complete with duck-dotted islands – a ‘picking’ garden overflowing with roses, lavender and dahlias, and a walled garden that leads down to the swimming pool, Cruden Farm was one of only three Australian gardens that made it into Monty Don’s BBC special, Around the World in 80 Gardens because it’s so photogenic through a camera lens.  Entry is $20 per person.

Set around a historic stone cottage that has been converted into a cafe, Heronswood gardens offer a glimpse into an unusual coastal microclimate. With views over the bay, a nearly constant breeze, intense temperature changes, sandy/salty soils and a dry climate mean that this garden is a living experiment in growing tough plants. The result is a picturesque combination of formal beds, winding tropical paths with overhanging papaya trees and Brugmansias and a wild picnic area dominated by thousands of white cabbage moths (normally unwelcome in a garden but the effect is magical). Heronswood is also home to the Diggers Club educational facility that is currently showcasing models of heirloom vegetables, has a large perspex art installation themed around the seasons, and has an AV room showing a documentary called Seed, and a short film called The Sex Life of Plants. Entry to Heronswood is $10 or free for Diggers Club members.

Due to the winding roads and occasionally rough terrain, an all-wheel vehicle is recommended. Rental cars are serviced regularly, fuel efficient and usually quite new. This is a 900km trip so it’s worth the investment.

What are your favourite gardens of Australia? Where would you recommend?