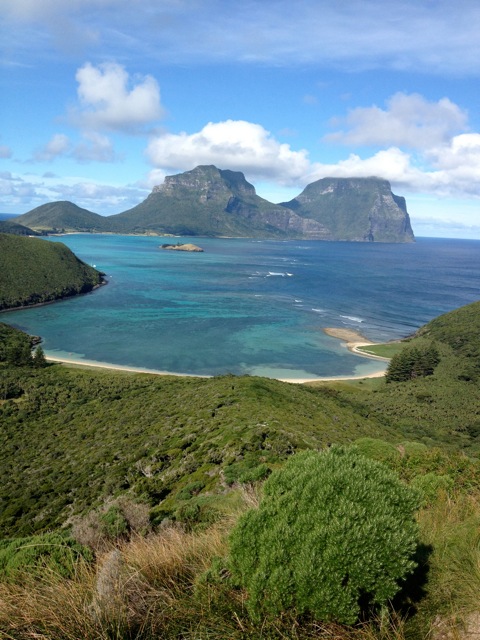 Peace, perfect peace; a quietness of heart, a lightness of being. That’s how I felt after five days at Lord Howe Island.

Many factors contributed to this sense of wellbeing. Travelling with a beloved friend, lucky sunshine in a week of ‘possible showers’, the kindness of our hosts Dani and Luke from Pinetrees Lodge and miles of pristine, bushwalk-able nature.

The shells on the beach made a wind-chimey tinkle as the waves washed over them and the water was every kind of blue; from navy depths to electric shallows. Mt Gower and Mt Lidgfield loomed at the southern end of the island like fabled twins turned to stone and around them, nesting Providence Petrels whirled in great arcs and dips.

The air was clean and the horizons held palms and pines (no glass, no metal, no hard edges). Everything was left unlocked and untended because it’s safe there. When was the last time you went anywhere and didn’t have to worry about  carrying a room key?

What’s more, it wouldn’t matter if you dropped your phone into the sea because there’s no reception anyway. For once, my iPhone was just a useless lump; not an endless source of distraction, entertainment and society. Lord Howe has filled me with a deeper understanding of the benefits of disconnecting and the subsequent sheer bliss of getting enough sleep for once.

It’s the kind of place that’s stunning all year ’round but if you’re a bushwalker or a budgeter, winter is definitely the time to go. The flights and accommodation are much more affordable during the winter months and the climate – while temperate all year long – is much more conducive to climbing up hills when it’s 21 rather than 31 degrees.

My friend Lou and I did all  the walks on the island except for Mt Gower, which is the big mama of hikes (you need to go with a guide and it takes 10 hours). All the other walks are pretty cruisy, especially Middle Beach to The Clear Place, as well as Transit Hill to Blinky’s Beach. The Mt Eliza – Kim’s Lookout – Malabar Hill – Ned’s Beach walk is moderate intensity which, when translated into ‘lazy ass’ is pretty tiring so take lunch, water and expect to sit around gasping and sweating a fair bit.

There’s plenty more Lord Howe action coming up so tune in for more highly informative gushing later this week. In the meantime, do yourself a favour and check out Pinetrees Lodge winter deals. If I could live there, I would, but failing that I will simply spend my days telling anyone with ears to go.

Have you been to Lord Howe? Are you going back? If  you answered yes, can we get married?