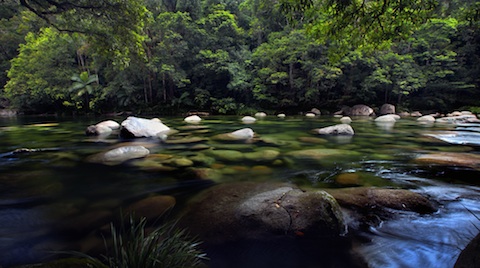 You appear to lack actual queens so I am putting my hand up.

I visited recently and it turns out I’m perfectly suited to the job. I love eating, drinking and lazing around a pool. I also like resorts, rainforests, palm-fringed beaches and cheap fresh produce.

When I visited in late October, the weather was a balmy 28 degrees, the beach was stinger-free and the water was warm (but not soupy warm).

Port Douglas is a sleepy little village replete with friendly watering holes. It’s overpriced to buggery so I would fix that. $30 for a Chicken Caesar Salad? Also, your sushi sucks and where is the fresh gelato? I am not interested in cruddy mass produced stuff. You have mangoes falling at your feet – I think they’re trying to tell you something.

On the upside, I visited Sea Temple Resort for my friends’ nuptials and it was sublime. The service was unfailingly attentive, the food was abundant and the setting looked like something out of a romantic comedy starring Adam Sandler.

Later, I visited Mossman Gorge, a tranquil swimming hole hidden in the Daintree rainforest. I watched bolshie fish swim around my feet as I waded into the sandy-bottomed oasis. Ahhh … bliss.

That is until a bossy black bush turkey with a scarlet mantel and yellow wattle emerged from the undergrowth to begin its assault on handbags, drink bottles and amused children. I have renamed this performance Bush Burlesque.

I stayed at Villa Rebello, a spacious beach house five minutes drive from Port Douglas and a short walk from the beach. Split between ten people, it was $180 for five nights; crazy cheap. I didn’t venture off the outdoor couch very often but, when I did, it was to jump in the pool.

I can only assume I’m getting this Queen of Queensland gig due to my exceptional qualifications.