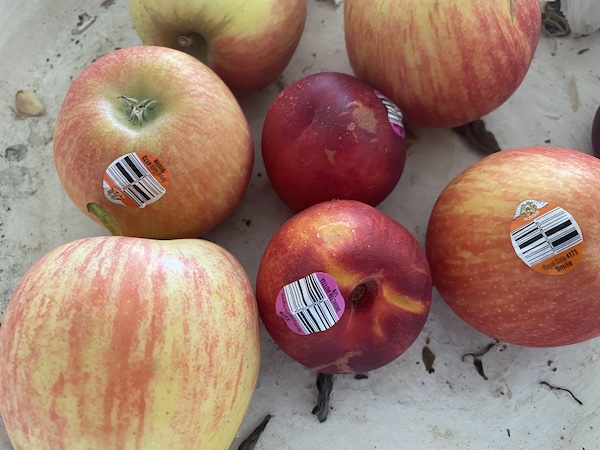 I cannot tell you how much I hate fruit stickers. You know the little stickers with the barcodes? This is just more unnecessary plastic getting in between me and my juicy peach.

But there seems to be dumb plastic everywhere.

From the plastic wrapping outside the box of tea bags, to the teabags themselves. I spent a few minutes picking those supposedly ‘premium’ pyramid teabags out of my compost heap because they don’t biodegrade.

We have stopped using Cling Wrap but my weekend papers show up in swathes of the stuff.

We don’t use bin liners but the recycling bin fills up scarily fast with all the plastic wrapping on meat, spinach leaves and grapes.

I am trying. I swear to God. I have been growing produce this summer (not exactly easy with the drought) but if the apocalypse comes and we need to survive, a few pecked-at cherry tomatoes and an organic cucumber is not going to cut it.

I worry a lot. I worry about using the microwave. I worry about giving Joey formula. I worry about the amount of plastic in his nappies. I switched to period pants for myself but the nappy situation in this house is not eco at all because most eco nappies are crap (as in, don’t fit properly and leak) and are super expensive.

I feed Joey tinned spaghetti because he will eat it. I buy him a McDonalds Cheeseburger every week for the same reason.

Am I accidentally killing my son with bad food? Is TV terrible? Are iPads addictive demons?

Is anything I am doing making a single bit of difference when Adani is digging another huge mine in North Queensland?

My friend recently advised me about the phenomenon of ‘virtue signalling’ and I am 100% guilty. I buy Who Gives a Crap toilet paper but then I post about on Instagram.

I really do care about the environment but I still drive a car, even if I am using E10 fuel.

I just feel like all the small things I am doing are ineffective, and all the big things I could be doing – running for government, protesting, becoming a human rights lawyer, or diplomat, or political journalist – are entirely beyond my capabilities.

I must admit that sometimes I do ‘virtuous’ things just because it makes me feel good.

But I am also increasingly aware of the social divide, and increasingly disgusted by overt selfish wealth, and saddened by the fact we’re conditioned – and socially rewarded – for aspiring to it.

So basically I am a socialist who likes online shopping, doesn’t have much money, wants to be a good mum but is baffled by the practicalities of raising a toddler, and is 3am fretting about many things, including – but not restricted to – drinking too much, being too fat, being overly concerned with being too fat because I am a lousy feminist, being a terrible mother, not doing enough to protect the environment and generally worrying about how much plastic there is in the world.

THERE IS SO MUCH PLASTIC.

What do you worry about? Am I the only one?