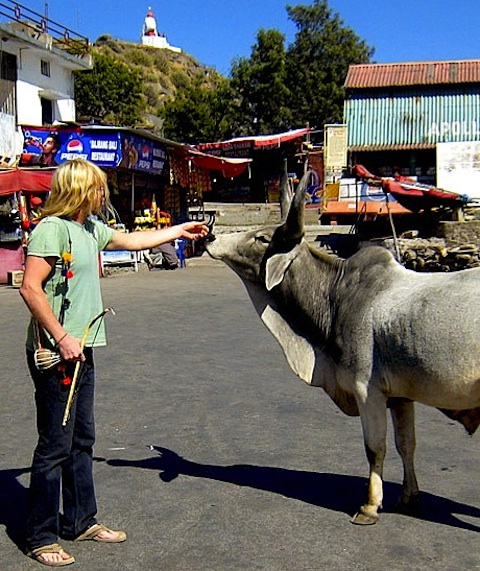 Favourite travel destination?: Planet earth, because there’s so much to see here. Its sounds clichéd but each place we have toured through we have found true beauty in. The variety and dynamic of experience and interaction varies so much. It’s like singling out the myriad of colours in a magnificent oil painting. From Delhi to New York, Sydney to Heidelberg, Paris to Tokyo.

Worst travel experience?: One of the most gut-whirling ‘oh NO’ experiences we had was arriving to our accommodation near Venice Beach in LA to discover our computer bag was missing. We had just flown in from Canada to LAX and had a one hour shuttle ride to the family home we were staying at. Eating pizza and relaxing I went to grab the laptop that wasn’t there and so began the search and frantic re-tracing of steps. We realized ALL our hard drives, USB’s and memory cards were in that one bag too, everything electronic, all our travel photos and movies! After many phone calls to lost and found and plenty of pacing, we were told to expect that the bag of computers had been taken and I was trying to understand the concept of moving on, let it go. Exhausted, by about 1am we decided to sleep and head back to the airport in the morning.

Arriving at the airport at 7am, I felt like a sniffer dog and scoured everywhere we had been. I found the airline service desk and explained what had happened. He said if it was left outside it would be dealt with by LA City Council not the airport. We felt crushed. He then said he would have a quick check out back. I leant over the counter and saw a black bag – yep it was ours! All there, all good! We had left the bag on the airport trolley outside while packing the taxi and it was amazing that in such a busy place it was safely returned.  So keep the faith in good deeds and don’t put all important computer gear, photos, etc in the one place while in transit.

Best tips for beating jetlag?: Sync your sleep pattern a little to your destination before you leave, then just enjoy yourself and don’t worry about it. I try not to think about what time it is back home for a few days and just keep busy. Depending on your travel plans, sometimes it works in your favour to not adjust so you can be awake all night long and sleep all day at your destination.

What is the one thing you don’t leave home without?: My phone

Best meal you’ve ever had while travelling?: The variety and quality of cuisine has been so varied everywhere though I found Germany was consistently good all the way round and an enjoyable eating experience. I don’t eat much red meat but that didn’t matter at all. In Australia I performed on Dunk Island where every lunch and dinner was prepared by world class Chefs. Then there is India where my favorite dish is palak mutter (traditional blended spinach with green peas – tastes better than it may sound! ) –  oh and in Paris I got up to seven croissants per day … food glorious food!

Best kiss?: My girlfriend every morning and in many different places … around the world I mean.

Best/scariest/funniest drive?: Driving through many beautiful countries offers many great memories and really instills the ‘oneness’ of us as humans on a wonderful planet. One particular drive that was quite exhilarating was driving from Toronto to Montreal, then up through to Chicoutimi in Quebec. The start was sunny, gradually turning to rain, then sleet, then into snow, then into a snow storm. We couldn’t see the road or skyline and the wind was howling like a thousand wolves. I filmed some of the trip up and you can check it out here.

What has been the big WOW moment of your travelling life?: Arriving in New York on sunrise, I was really affected in a great way. A giant orange sun behind an amazing silhouetted skyline, then grabbing coffee and breakfast on Lexington Ave. The twin church towers in Cologne really had me in visual awe and so did the Ellora Ajanta caves and shrines in India – ancient temples carved mostly by hand from stone.

Eli Wolfe is a National Youth Ambassador who is currently touring Australia on a ‘Speak Lovingly’ Tour that promotes respectful relationships. Check him – and his tour dates – out here.