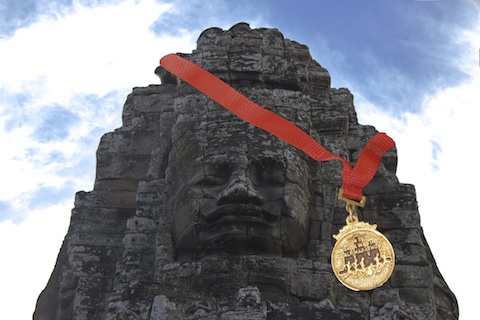 The 2011 Angkor Wat Half Marathon

Georgia Keighery runs like a gentle breeze in Cambodia

The thing is this: if you rewind almost exactly 10 years, to almost exactly the same Sunday morning, I was in Sydney, rolling out of a club in the city and literally bumping straight into a marathon that was going on there. In my state, it took me a while to work out what was going on. Once I realised that there was a foot race right in front of where I wanted to stumble, I was immediately annoyed in only the way that a self-centred, youth-and-clubbing-sort-of-fit, 22-year old can be. “Jesus” I slurred to my friends, “if I’m ever up this early without having been up all night, shoot me, wont you?!” and I added, as I teetered along, “And if I’m running, shoot me twice!” … Ahhh, the innocence of youth. Or something.

Flash forwards 10 years to the first weekend of December 2011 and I am lucky enough to have friends who chose to ignore my demands. This has left me very much alive, and very much standing at the starting line for the Angkor Wat International Half Marathon in Siem Reap, Cambodia.

Somehow, in the time between the club and now, by some miracle of nature, I have become a woman that loves to go for a run. Also along the way, my sense of adventure has been relocated from exploring the bounds of consciousness inside a nightclub, to exploring the countries and cultures of the world. Don’t get me wrong, I still love the odd jaunt back to a late-night dance floor, and I’m still self-centred, but the me of my 20s would take great pleasure in rolling her eyes back into her head and calling me ‘soft’.

Standing at the start line of a 21km, Cambodian running race, however, I didn’t feel soft at all. I felt stupid. I had never run this far before. I couldn’t image what had possessed me to come to a place I’d never been before and do this. And then the starting gun went off …

What ensued for the next two-and-a-half hours was one of the most amazing experiences of my life. I can’t overstate that. It’s actually hard to find words for it, which is pretty rare.

Not only did I run the entire race without too much discomfort, I ran the entire race with a huge grin on my face! It was totally unbelievable. I am no athlete either; my ‘run’ is not something you’d call competitive unless you had your tongue firmly in your cheek. But the marathon took place in a loop around the amazing temples of Angkor Wat and Angkor Thom, which I had never seen before. Every time I began to feel physically drained, another magnificent temple wall, or stunning stone arch would appear on my path.

Between these sights, the race coiled through little villages, and here’s the clincher: hundreds of children from the villages had lined up along race route to high-five the runners as they passed. The race is an event that raises money for landmine victims and the underprivileged of Cambodia, so these gorgeous, smiling kids were coming out to cheer us on. They’d hold their hands out for you to brush as you ran past, and I couldn’t stop smiling, and I couldn’t let myself miss a single little hand.

My time for finishing the race was average at best, and I couldn’t have cared less. I felt like I’d been part of something truly special. A personal best on every level. And a high that left the club-kitten looking like the soft one!