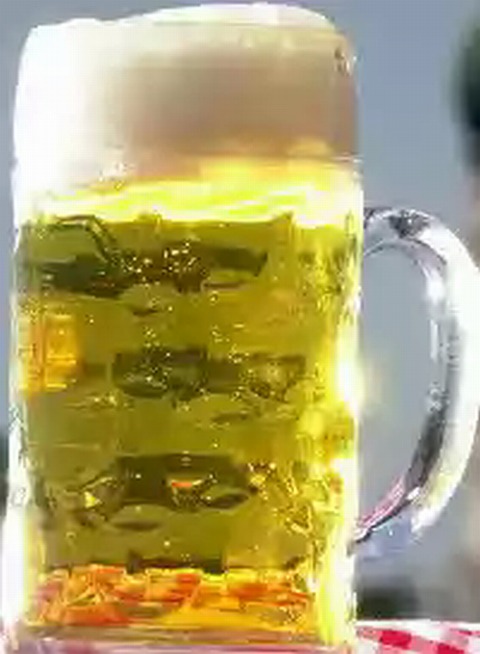 Welcome to Berlin: The land of beer, bratwurst and bizarreness by Anna Taylor Welcome to Berlin – the land of beer, bratwurst and bizarreness

Flying in from party town Mykonos, there was little chance that I wasn’t going to be sick in Berlin, but just how sick was unexpected. On my first morning in East Berlin, I woke up feeling like an A380 airbus had crash landed on my head. My girlfriend helped me get dressed and slung me over her shoulder to go off in search of a doctor. Arriving at the surgery, we discussed the real issue at hand; we had flights to Munich for Oktoberfest in five days’ time.

The verdict: I had a bad case of tonsillitis. So what were our real options for lederhosen in a week? After being handed a ten-day antibiotic prescription, I sheepishly asked if I would be well enough to drink at Oktoberfest. The doctor replied, “Yes that’s fine. Just limit yourself to no more than three steins.”

Three steins. For those of you who don’t know the volume, that is three litres. Welcome to Berlin.

After five days of barely moving from bed (despite the doctor’s recommendation to drink half my body weight in beer) we decided Oktoberfest wasn’t such a good idea. Cancelling flights and moving hotels, we were keen to start experiencing Berlin so we ventured out for dinner.

We arrive at a really cute traditional style restaurant filled with an amazing home cooking aroma. The menu is completely in German so we do our best to order, managing to get the delicious pork belly and of course, a stein of beer each. One thing on the menu that confuses me is ‘Kartenspeilen’. From my half-arsed recollection of Year 9 German, I think it has something to do with the word ‘play’. Whatever it is, it sounds interesting so we order it and ask for some water.

The waitress brings more beer (apparently ‘water’ here) and a pack of cards. We glance around at the other tables in the restaurant and realise that this is completely normal. Although everyone else was probably playing something a little more sophisticated than our championship rounds of snap, playing cards really does complement a meal. We even got a scorecard and one of those little pencils.

The next day we were back into tourist mode. On a bike tour around the city we were sit-up-the-front-of-the-classroom keen to learn about Berlin’s tragic, interesting history. We saw the Berlin wall that once divided East and West Berlin, and stood above Hitler’s bunker where he not only married his wife, but where they both took their lives. The image that has stuck with me is the monument to all the lives lost. It was a field of these huge concrete blocks, each 10,000 Euros in value. As Berlin is known for its amazing graffiti art, they had to spray a protective coating over each of the blocks to ensure they couldn’t be defaced. According to our tour guide, post graffiti-proofing the field of monuments, they discovered that the company they used was actually the same company that supplied the gas to the Nazis, which took the lives of millions of Jews. Disgustingly ironic.

Despite the extremely depressing history, Berlin is an amazing city.  Whether you are interested in learning more about the city’s past or going to a café where you literally feel you are in a moving artwork, it’s a must on the travel list.

1 comment on “Welcome to Berlin: The land of beer, bratwurst and bizarreness by Anna Taylor”