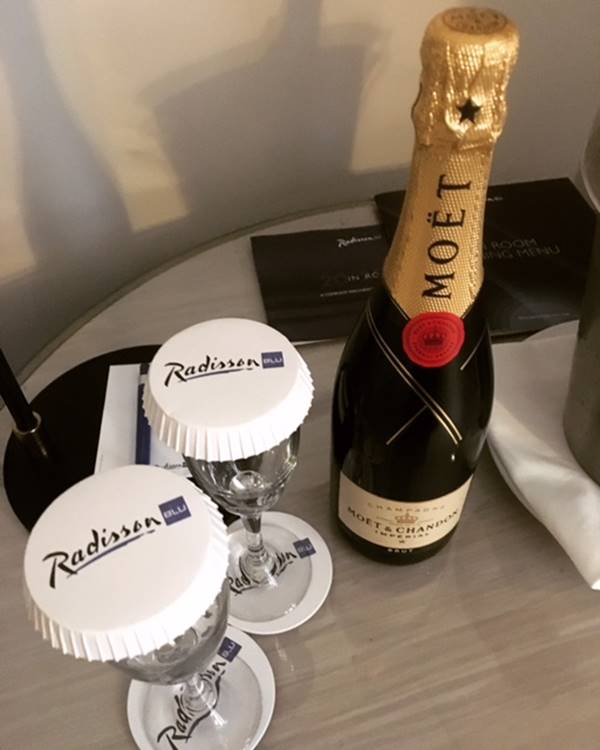 Planned romance is a fraught area, especially when life’s absurdities get in the way. That’s what happened with The Spark and I on our recent babymoon to Sydney’s five star Radisson Blu.

I’m only six months pregnant but the next few months are crazy and before we know it, we won’t have had time to enjoy the calm before the newborn.

Hence, our Saturday night in the city. It coincided with two years of us having met (don’t laugh – I know it’s a ridiculously short time in which to meet, get married and pregnant but that’s how we – meaning I – roll).

The first hurdle came when one of The Spark’s kids announced that she had her cheer leading concert that day. Cue four hour round trip to Camden.

The second hurdle was that I was jet lagged. By the time we got to the hotel, I was ready to curl up in those 1000 thread count sheets and call it a night, even though it was only 6.30pm in the evening.

The third hurdle was that strange thing that can happen when otherwise loved-up couples strike a peevish day.

We talked about where we stand on discipline, how we will raise our son, how it will all work with The Spark’s daughters, whether or not we’re excited about the baby. On and on it went.

We eventually moved the conversation to the indoor pool and spa area which was notably free of the usual stench of chlorine. It was pristine and the water cooled our bodies and our heads. After that, we weren’t long out of bed, despite the allure of the Fax Bar or the famous Bentley restaurant downstairs. It seems we’re already preparing for parenthood by getting used to the fact that we’d rather sleep than do just about anything else.

It wasn’t until breakfast the next day in the hotels’ legendary Lady Fairfax Room (named after one of the building’s original residents, the founder of Australia’s biggest newspaper conglomerate) that the talking stopped and we gave ourselves a break to enjoy our surroundings. The buffet breakfast is as extensive as any you will see in a five star hotel with the added bonus of clear identification of what contains gluten.

The check-out was generously late – from 11am rather than 10am – and the warmth of the reception staff cannot be underestimated, not to mention their impressive language skills. One was speaking Portuguese while the other was making jokes in Afrikaans.

While our stay wasn’t quite the romantic escape we had planned, it was an excellent opportunity to take stock, ask and answer important questions, and to come out the other end with a clearer understanding of each other’s thoughts. And maybe that’s what enables real love, versus idealised romance? The ability to communicate, resolve differences and still enjoy Sunday morning together in a fancy hotel.

Radisson Blu Plaza Hotel Sydney is located at 27 O’Connell Street and is within short walking distance of the Sydney Opera House, the Botanic Gardens, The Rocks and both the Museum of Contemporary Art and the NSW Art Gallery.