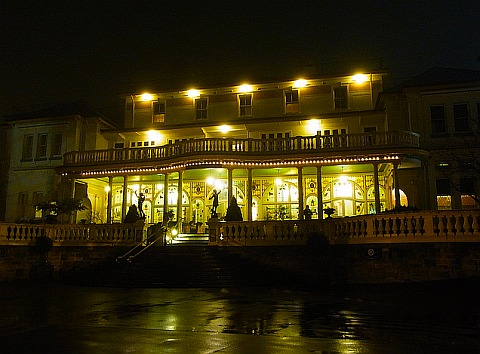 Yulefest at The Carrington: Best. Weekend. Ever. There is something exciting about a girl’s weekend – the delicious promise of wine, shopping and maniacal laughter.

A little while back, I was lucky enough to win a night at The Carrington for Yulefest so I decided to take two of my lady friends on a fake Christmas adventure.

Arriving at the hotel, you feel like you’ve walked onto the set of Boardwalk Empire. Sweeping driveways, a 1920s patio area, magnificent stained glass windows and original features such as a lift where you open the doors by hand.

The walls are lined with immaculately preserved Norman Lindsay prints, historical black-and-white photos and tourism posters for the Blue Mountains. For once, the heritage colour scheme of burgundy, English Racing green and cream doesn’t drive me nuts and there are tasteful pieces of antique and reproduction furniture placed throughout the building.

Our room was perfectly comfortable and featured a window seat that appealed to my writer buddies (they both went and sat in it straight away). The bathroom had an institutional vibe, further enhanced by the lack of shower screen. It seemed purpose-built for hosing off loonies or infirm elderly.

The Carrington’s ongoing renovation has been underway since 1999. I reckon that bathroom is next on the ‘to do’ list.

Come 7pm and we headed down to the bar to be ‘piped’ into the dining room. As much as that sounds like a cruel catering-inspired torture, it was actually just a Scottish bagpipe player.

Drinks were served, canapes were delivered and the rest of the night is a blur of extreme happiness.

The first course was pumpkin consomme (clear soup), second was prawn, avocado and salmon salad, third was roast turkey wrapped in proscuitto with mash and roast veggies, fourth was a dessert plate with a mini pudding, trifle and cranberry rice pudding and fifth was a truffle, macaroon and a cuppa.

By the end of all that, I was ready to curl into a foetal position and groan for a while but no; the revelry continued. We stepped out into the fog and walked approximately 20m to the Old City Bank Brasserie & Bar where Pugsley Buzzard, an American musician was rocking the joint with his Tom Waits voice and ragtime piano.

Next stop: The Harp and Fiddle, approximately 40m around the corner. More drinking and more dancing, but this time to the hits of 2001. It was like being back at university.

It was 3.45am when we finally dragged our sweaty, smoky bodies back in the door. More decent looking men had tried to pick us up in the past five hours than in the past decade.

Nothing cheers up 30-something women quite like refusing the advances of handsome 24 year olds.

5 comments on “Yulefest at The Carrington: Best. Weekend. Ever.”