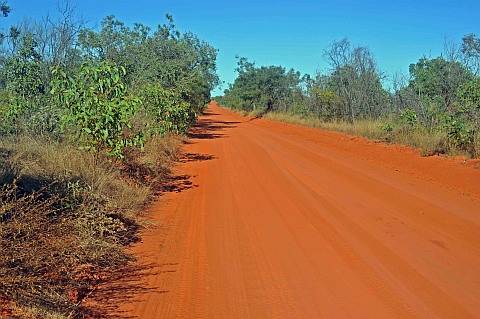 The number one rule for anyone travelling from Perth to Broome in a motor vehicle is:  Turn Left at Every Opportunity. Admittedly, it must be preceded by “Take the ‘Coastal’ Road.

On a cold Perth morning we woke early, thought for two seconds and knew we’d be wasting a day more to stay. We’d imposed on our gorgeous friends, tasted the best and worst of bistro dining in Subiaco, walked the parks, the lookouts, the city and east end, and taken the ferry to Freo to taste its maritime past and its famous fish and chips.

We knew better than to look for more adventures here when the real fun lay 2,800km along a stretch of red road snaking its way into the tropics.

So we’re off, driving 460km into the sunset to Geraldton and a waterfront sleep on the foreshore carpark.

60km off the beaten track but it was sealed at least, a bonus not often afforded on the great western coast.

Kalbari = pure white sands, calm bay for watersports, green grasses to interrupt the now red, red earth for picnicking pleasure. A sleepy heaven for a day-napper like me.

Carnarvon next – no left turn, just north on the beaten track. The home of WA bananas, the miles-long pier (with a train for the lazy fisherman), and for me, a day reading a book overlooking the vast Indian Ocean, plus our first glimpse of a tiger shark. It also boasts the best seafood pasta in the whole of WA. The Old Post Office Cafe is a destination in itself.

I never imagined an outback sheep station perched on the edge of red cliffs and sandy beaches, and now I’ll never forget it. Ancient land, yes, and ancient sea. The beach was a graveyard for giant shells; a paradise for an intrepid shell collector. We even found a fresh lobster on the shore. Day spent exploring the shell-laden coast and the night spent toasting marshmallows over a campfire.

Follow the red ridged road further and discover blowholes worn through ancient cliffs. Plumes of water 30m high and the rushing, roaring sound of a sea so mighty it deserves respect.

Then, not 100m away, men literally harnessed to the cliffs, reeling in the heads of giant Spanish Mackerel. There was big burly disappointment when the men realised the shark had beaten them to their game.

Everything is larger than life. Even the fisherman.

Next left: the Coral Coast. 260km out onto a peninsula with fingertips that reach out into WA’s coral reef, so little known by the far Eastern resident. Exmouth is a new home of my treasured memories.

Swimming with a 7m long whale shark will make anyone shiver in their fins. It looked me in the eye. It swam towards me. I swam beside it, it outswam us, we dropped in again ahead of it. The cycle continues. We did this for an hour and I have never seen a more peaceful or grand creature.

Same day different patch of reef, six manta rays vying for our attention in the water. My first sighting of these playful creatures with wingspans twice my height. My god they are beautiful.

Skip ahead 1000+ kilometres, through The Pilbara’s mining country with earth so dense with minerals that it shimmers purple in the sun. Iron country and, as it turns out, the epicentre of mining propaganda. Past Point Sampson and Karratha after a short sojourn to charge up the van and shelter from unseasonal ‘dry’ season rain.

Then The Kimberley. Pindan land – the world’s most ancient soil and a darling for travel-worn feet. Warm, soft earth, like cornflour that stains the soles red.

The greatest find was on the southern point of 80-mile Beach, 260kms north of Port Hedland. Cape Kerauden is nirvana.

Sandy tidal flats, mangroves, stinging shells, crocs and the most spectacular landscape in the natural world. Perch yourself on the hilltop and prepare for endless perfect sunsets and whipping tropical winds as you watch the tides receed miles out into the distance, like magic.

But the trip must go on. We drag our sorry souls away, back to that great northern highway.

Skip ahead another 800kms through the highest dry-season rainfall since the 1940s. Every left-turn road was a river – and cut.

So Broome came faster than we thought. A town of contrast, its centre is a cultural hodge podge with a dreadful history that could reduce the hardened traveller to tears, so steeped it is in slavery, violence and prejudice. But the Broome of today is quaint, friendly and remarkable. Its surrounds, unforgettable.

Sunsets at the ancient dinosaur trodden cliffs just out of town are the richest red in the world, stealing attention from the Pindan cliffs and turquoise seas.

260km up a rustic earthy track we entered Cape Leveque, the most northern tip of this corner of Australia before the coast snakes north-east on its way to Darwin.

Remote indigenous communities, sacred land and more powdered Pindan. It is a side of Australia that far too few people see and a place impossible to understand without experiencing it.

Who would want to leave? Not us.

But we must. We lamented our goodbye to this Pindan land. 4000kms on the road wasn’t enough.

Do not grow grey before planning to see this country.

4 comments on “Oh Pindan, my darling by Kristy Mills”