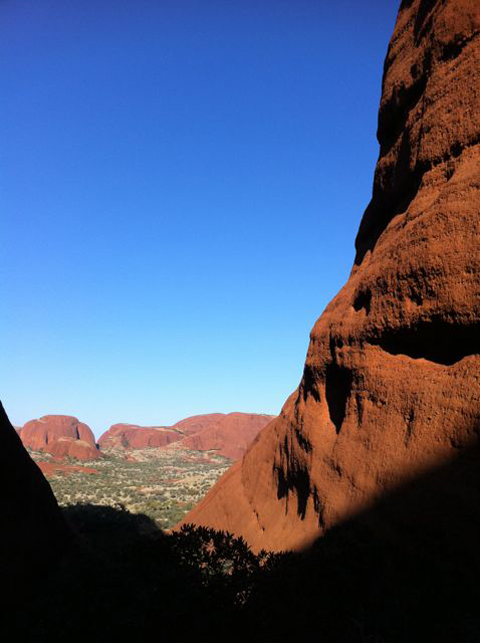 You know how I told you I have two new contracts? Well one of them is representing Ayers Rock Resort in the Northern Territory. As far as awesome goes, that’s a 10/10.

I went out there on a famil (travel industry jargon for ‘familiarisation’) a couple of weeks ago and I was blown away. The resort is beautiful but that’s not what did it. It was the desert environment, the local Anangu people, the Parks Australia staff and the deeper understanding of local indigenous culture that I walked away with.

Uluru Kata Tjuta National Park (formerly known as Ayers Rock and The Olgas) is operated under an unusual leasehold arrangement where it’s owned by the local Anangu people and jointly managed by the Federal government. This may not sound like a big deal but it is; this is the first indigenous land rights arrangement of its kind in the world (gold star to former Aussie Prime Minister Bob Hawke for pioneering it).

The reason for this? Uluru and Kata Tjuta are immensely significant spiritual places for the Anangu people. The best way I can describe it is that the national park is what Vatican City is to Catholics. When you set foot in the park you, you are in another country; Anangu land. That is why Anangu people respectfully ask tourists not to climb the rock. Can you imagine The Pope letting visitors climb all over the papal altar?

You hear about ‘women’s business’ and ‘men’s business’. Well, it’s serious. Anangu women won’t even look at sacred sites reserved for men. The details of ‘tjukurpa’ (tribal law) is reserved for the initiated but here’s a tip; Uluru was a meeting place and there are several sacred spots around the base but Kata Tjuta is The Big One as far as significance goes; it is a sacred men’s site and not a single white fella knows why – all we’re allowed to know is that it’s important.

I went for a guided walk through ‘The Valley of the Winds’ at Kata Tjuta and, without having a clue about anything, I can honestly say it felt special. Walking amongst enormous red boulders with finches darting in and out of wild peppermint bushes and ravens soaring effortlessly overhead on thermals, I felt at peace. The immense silence carried on the wind is something that you simply cannot find within coo-ee of a city.

I know I’m a starry-eyed convert to the red centre but I honestly think everyone should go there at least once. It is one of the most extraordinary places I have ever been.

Have you been out there? What did you think?