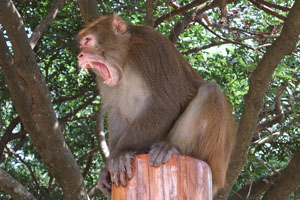 Earlier this week, a woman was attacked by macaque monkeys while on holidays on Thailand.

She was reportedly trying to get over a phobia of the primates by visiting the ominously named ‘Monkey Island’, near Phuket, when a group of them attacked her. Her tour leader said some people had been teasing the monkeys earlier, and “that they don’t necessarily attack the specific person teasing them.”

That last bit makes sense when I think about all the people traumatised by monkeys while on overseas holidays.

A friend was staying in a Bali resort where monkeys hung out with the humans around the pool. A chef was sharpening his knives nearby when one of the little buggers galloped past and grabbed it. The furry thief ran up a tree and spent the afternoon threatening to throw it at resort guests, occasionally tossing it in the air and catching it to add a bit of excitement to his act.

In another part of Bali, two friends were wandering around “Monkey Forest” when one of the little forest-dwellers grabbed one of their hats and took off with it. The crafty fella was immune to their charms and refused to give it back, scaring the heck out of them with a display of his crazy monkiness (but also sometimes putting the hat on his head upside-down in a display of crazy cuteness). In his defence, once they’d given up on the hat, he gave it back.

As for me, I had my own primate scare while hiking through the Amazon in Ecuador. We trekked uphill in the rain for two hours, heading for a lookout. As we neared our destination, we noticed a few howler monkeys swinging through the trees above us. “Aww, they’re so cool!” we all cooed.

Our tour guide took one look at them then sprinted ahead. “Keep walking! They’ll attack us if we stop, they think we have food. That male bit one of my friends!”

We rushed to the top of the lookout, took a few blurry photos of the aggressive howlers quickly swinging their way towards us, then ran back down the hill. Totally worth it.

Have you had any run-ins with furry little creatures on your travels? Has a monkey had a go at you? Share your troubling story…