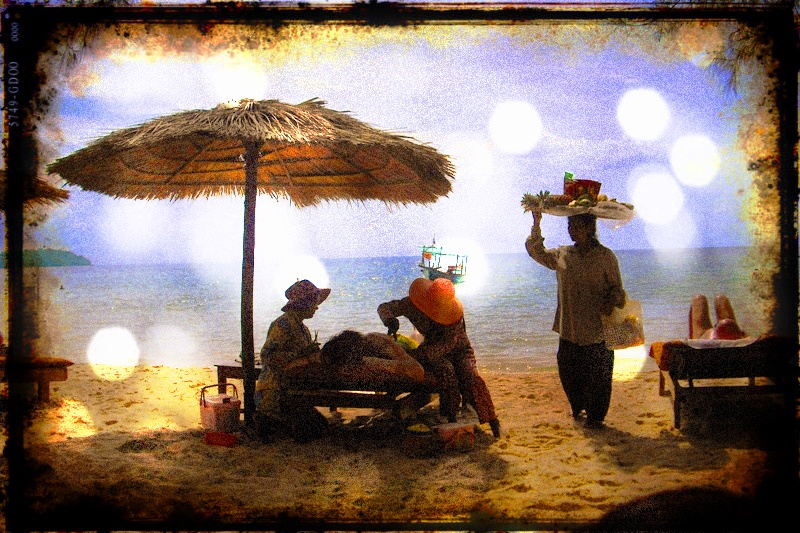 Sihanoukville is a strange paradise, composed of dusty red-soil roads, colour-chequered huts and houses and weather-beaten seaside bungalows. The highest point fall into space on two sides and lush green fields rolls down on one, powdery picture-perfect sand to the ocean on the other. All the names in Sihanoukville are like this: ‘Holy Cow,’ ‘Starfish,’ and ‘Happy Herb Pizza,’ all strange western ramblings that resound with tourists and present the possibilities of profit and progress. Sihanoukville is the only sea port city of Cambodia and the major gateway to the islands close by. Pitted against the rest of the country, it seems like a rural utopia, filled with sleepy pyjama-wearing inhabitants who wonder amidst free-running chickens and grazing cattle. Most of them are fishermen who scale mighty sea cliffs for food. Others are women of fishermen who sell grilled squid and lobster on the beach or offer,“pedicure, manicure or Bikini wax, Miss,” and teach their children how to make bracelets, drive a moto or gather garbage from the streets. Their lives are pitied and envied in equal measure for their simplicity, sleepiness and serenity.

On the morning after my arrival, the pounding rain has finally stopped (daily monsoons are the side-effect of the rainy season!). The sky has cleared and I can quite easily see why these people turned into fishermen or became women of fishermen and never looked back: who wouldn’t swap a city-life for living life close to the sea? There it was – the answer to my self-imposed task of my trip to ‘Snoukieville”, as some foreigners like to call this seaport town – to find out the secret of Sihanoukville: its noble savage role of hosting a seaside. In the fading light of the late afternoon, I kneel down along the water’s edge and let my fingers run through the fine muddy sand. Right here at Otres Beach, I force myself to sit still and watch the waves crushing at the water’s edge, washing the sand to shore like golden honey melting into a glass of milk. There is something special about the waves and the wind and the water here: a kind of hypnotic rhythm to the strangeness of Sihanoukville.

As the sun fades away, I lie down in the sand and look at the sky, the spitting image of the glittery silver blue ocean that surrounds me. Sitting on Otres is like sitting on the prow of a ship; every moment you expect to feel it pitching beneath you … The next morning the sun is shining like a fireball and at an instance life feels utterly beautiful. The magic of Sihanoukville is that its seaside can turn the daily grind into a dream, making the ordinary look a little surreal in the end. And so the strangeness that lingers upon Sihanoukville and its PJ wearing inhabitants isn’t that awkward and strange anymore. The longer I am here, the more I get the gist of it; laziness can be appealing when close to the sea. And on a fine day like today, after Sihanoukville’s fishermen and women of fishermen have arrived on the beach, I slowly make my way back to town, walking along its seaside and vanishing like mist over the bright blue sea.