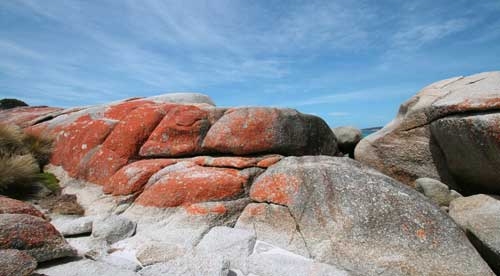 Named the world’s ‘hottest’ travel destination for 2009, Tasmania’s Bay of Fires – located on the state’s East Coast – remains one of its best kept secrets.

Tasmanians are good at keeping secrets. I remember when my family first emigrated from ‘The Mainland’ and it took us months to work out the best picnic spots and weekend destinations. Even after getting vague directions from an evasive local, we’d usually just stumble across some well-known gem after Dad took a wrong turn and landed us in the middle of nowhere. So it should have been no surprise to find that, when trundling up the east coast with little more than an out of range Google maps app on my iPhone, the road to the recently nominated ‘best beach in the world’ wasn’t signposted.

Located just north of St Helens, the Bay of Fires is actually a number of white beaches glued together by mammoth granite boulders formed 380 million years ago. Taking its name from the Aboriginal fires that dotted its shores, the bay stretches 29 kilometres from Binalong Bay in the south to Eddystone point in the north. Getting there is simple yet easy to miss – there’s only one signed turn off to Bay of Fires and the common assumption is that you’ve reached it when you hit the beautiful Binalong Beach. But don’t give up. Follow the road to the end and you’ll be rewarded with a stretch of solitary elegance that will take your breath away.

The beaches that make up the Bay of Fires are startling to behold. There are endless ribbons of crystalline white sand that melt into azure waters on one side and salty sea scrub on the other. Clusters of lichen covered rocks look as though they’ve been painted with ochre and you can still find huge collections of Aboriginal middens (discarded bones and shells) among the dunes near Boulder Point. On a clear day you are instantly transported to another world where your eyes soak up the contrasting colours to the tune of roaring waves.

The best way to experience the bay is to make use of some of the many campsites in the area. If you’re flush and reasonably fit, Anthology run guided four-day walks through the Mount William National Park and Bay of Fires for around AUD$2,000. Alternatively,  you can do it yourself by following the turn-off to ‘The Gardens’ and setting up camp in the southern section of the bay. If you’re short on time but want maximum impact, stop off at Salty Seas in St Helens (turn off the Tasman Highway onto The Esplanade) and pick up a freshly caught-and-cooked rock lobster, some hot chips, and settle down for an afternoon picnic in the Bay of Fires conservation area just off Lyall Road. There you’ll be rewarded with mouth-wateringly good nuggets of crustacean and what is, inarguably, the best view in the world.

Getting there: Virgin Blue run regular flights to both Launceston and Hobart from Sydney. For a pleasant day trip from Hobart take the Midlands Highway north to Campbell Town, stopping off for a scallop pie at the Ross Bakery Inn before turning onto the Esk Highway to the east coast. Visit http://www.parks.tas.gov.au/index.aspx for maps.

Anthology Travel run daily guided tours from Launceston to Bay of Fires from early October to early May. Package includes accommodation, all meals, non-alcoholic beverages and a selection of Tasmanian wines. Visit http://www.anthology.travel/ for more information.

2 comments on “Bay of Fires, Tasmania”