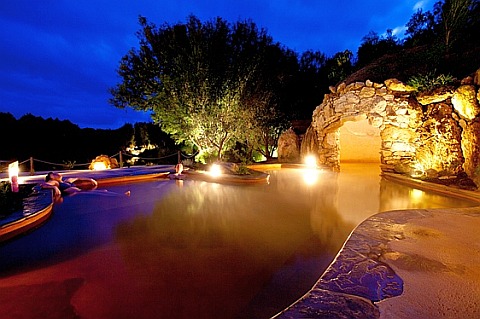 But like many travel junkies, I get pretty itchy if my options for random sojourns are blocked by life’s obligations. Add to that Melbourne’s early winter (think: bitter sheet winds, grey skies and two pairs of socks just to feel your toes) and the fantasies of being barefoot in Bora Bora start getting a bit obsessive.

And it’s only May! Thankfully, there are options closer to home for adventure (and warm toes), so it was with a big sigh of relief that I discovered the Peninsula Hot Springs are open for twilight bathing every night until 10pm.

Armed with $20, our bathers, towels, and a car full of sushi snacks, three of us fled inner-city traffic at 5pm and were up in hot spring land by nightfall.

It always amazes me how much your shoulders unravel just by being in the wide open air. Almost immediately after pulling up in the car park, I felt calmer. The air smells so beautiful up in Rye, and apparently the entire Mornington Peninsula is situated on a fault-line.

The hot springs themselves are completely magical. Also known as ‘thermal pools’, there are five or six outside pools which range in temperature from around 32 to 40 degrees celsius, and they get warmer as you ascend the hill. You feel like a little kid dipping from one pool to another, and my favourite by far was the one built inside a make-shift cave, with a little window portal.

Bathing outside is exciting enough, but being dizzy with heat while you’re in the freshest air possible, under a starlit sky is as relaxing as a full body massage. Add to that the amazing mineral content of the water (said to heal all sorts of ills from eczema to arthritis) and by the time your fingers are wrinkled like a prune (as mine were!), any muscle aches are but a distant memory.

We bathed from 7-10pm, and almost had to be fished out of the water. An easy sail home as there’s no traffic so late meant we were all snuggled up in bed by midnight. You sleep amazingly after a thermal soak, almost like a super strong Epsom salt bath.

Now that’s what I call a hot spring fling.

No passport – or sunscreen – necessary.