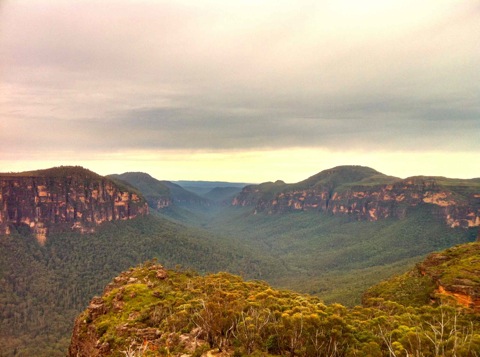 Sunday morning arrives and I’m hungover, cranky and altogether too tired to be awake at 8.30am. Yes, I am one of those people. Irresponsible, gig-attending and wine drinking.

Nonetheless, it’s not raining so my friends and I are going for a bushwalk in the Blue Mountains. Natureboy has sussed out a route – Lockley’s Pylon – so we pile into the car and drive up the M4 to Leura, turn right at Mt Hay Road and 10.4 kms later, we have bumped our way down a corrugated dirt road to the trail head.

This is an unusual landscape. Initially there is scrubby bushland but it rapidly thins out to low, scrubby heather. I should be wearing something white and winsome and running toward a bloke named Heathcliff. It’s beautiful. It’s quiet. It’s completely isolated and blue, green, grey.

Natureboy tells us about the local crazies that live in caves. One such cave dweller thinks he’s the King of the Snakes. Apparently if anyone tries to develop the bushland, this mentally ill hermit will burn whatever they build to the ground.

Having visited this wild place for a very flat, easy three-hour walk along the ridge line, I tend to agree with Snake Dude. No one should wreck this place, unobstructed as it is by manmade structures. Not sure about the ‘Burn it’ philosophy but it should be preserved at all costs.

Have you been for a good bushwalk lately? Where to? Do tell!