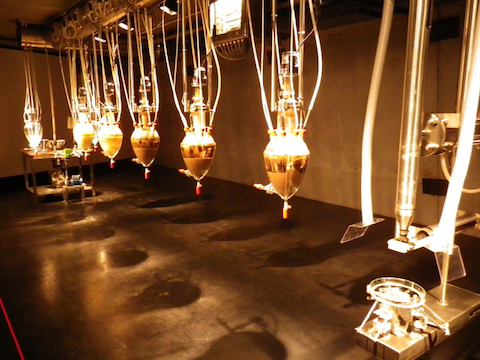 Louise Southerden takes us on a trip down the rabbit hole at the Museum of Old and New Art in Hobart, Tasmania.

Wow, MONA. If Tasmania’s new Museum of Old and New Art was a person, she’d be cool and approachable. Built by art-lover, self-made-gambling-savant and Tasmanian-made-good David Walsh, then filled with his collection of oddities, it’s a world-class museum that’d be at home in Berlin or Beijing. Instead it’s loitering on a riverbank half-an-hour by ferry outside Hobart.

At the entrance, walk in through a fun-fair mirror wall beside a tennis court. Huh? Prepare to cast off the lines of rational thinking as you descend into MONA’s belly, along ramps and nuclear-shelter tunnels, into vaults and video rooms. It’s a vast, underground, wonder-ful world of innovation and imagination – with a few Egyptian scarab beetles and mummified cats’ heads thrown in for good measure.

With you is the provocatively named ‘O’, a modified iTouch that’s soooo much more than an audio tour. The exhibits have no labels (rumour has it there were originally no signs on MONA’s public toilets either) – instead, you press the O and it locates you and offers up Artwank (written commentary), Ideas, Gonzo (a rave by David Walsh or curator Elizabeth Mead) and Media (soundtracks, interviews with the artists, music inspired by the art). It also lets you Love or Hate an exhibit, and find out how many others feel the same. At the time of writing, Bit Fall (a waterfall of words) is the most popular, Cloaca (the eating, pooing machine) the most hated; Walsh has threatened to remove the most loved and keep the most hated works – just to keep us out of our comfort zones. And when you leave MONA, you retrieve your tour online, to re-read, relive and share it with friends.

The O makes MONA at once public and private, personal. There are no guided tours, there’s no jostling around exhibits. It’s often busy – the museum has had about 280,000 visitors in its first eight months and can get 3000 people a day – but it never feels crowded. And unlike a more traditional museum or art gallery, the works are not arranged thematically or chronologically; 2000-year-old artifacts rub shoulders with avante-garde artworks that don’t just push the envelope of good taste, they tear it up. Be surprised, blown away, affronted, amused, touched, involved. This is art at its finest. Run, don’t walk, to MONA.

Go: MONA is open Wed-Mon 10am-6pm, entry $20 (it’s free for Tasmanians). Cloaca is fed twice a day, at 11am and 4pm. Also on site are a restaurant (The Source), micro-brewery (Moo Brew), winery (Moorilla Estate) and eight fantastically surreal accommodation pavilions, starting at $490 a night. MONA FOMA (Festival of Music and Art) is on 13-21 Jan 2012. See mona.net.au and mofo.net.au

Have you been to MONA? What did you think? Were you confronted? Inspired? Outraged? Do tell!