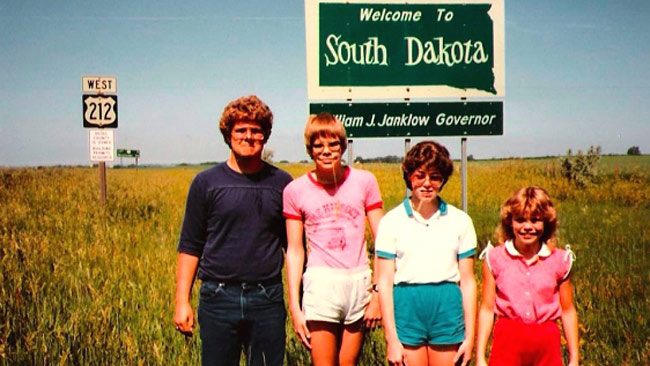 The truth about family holidays My book club girls called me out on the fact that I only ever write about the good stuff that happens on trips so I am going to tell you about Part 2 of my Easter break: The Family Holiday.

I haven’t spent a lot of time with small children, mostly because parents don’t let drunk people babysit their infants.

It was with some trepidation that The Spark and I decided we would visit my Mum for the long weekend. She lives in Lennox Head, we live in Sydney. That’s a 10 hour drive on a good day. On a holiday weekend, it could take anytime between 10 hours and 12,000 years.

The trip up just happened to coincide with the day after my 36th birthday. I had sensibly planned early drinks at a local bar to celebrate; a gathering that turned into the kind of night where the only thing you remember is your seventeenth cocktail and telling everyone you love them. That was at 8.30pm.

The Spark’s kids have the energy of Jack Russell terriers who have done a lot of coke. They arrived at 8am the next morning, only to find me naked and disorientated with a hangover that would rival that of the entire nation of England after a World Cup win.

I hadn’t packed. I couldn’t remember who I was. I wanted to throw up. And then we drove for 12 hours, stopping at every McDonald’s on the way.

We arrived at my Mum’s safely and things were OK until 4.30am the next morning when the Baby Sparks woke up and proceeded to talk and squeal and otherwise party hard, waking everyone up.

Saturday was a long day. My mum is obsessed with cleaning and small children emit a sticky substance that gets on everything. By the end of the day, The Spark and I were both so stressed and miserable that that our Bali break was a distant memory.

Sunday started much the same way: at 4.30am. It was at this point that The Spark claimed a small victory when I declared that I never want to have children: ‘Just rip out my womb and feed it to the hyenas,’ I said, not joking.

After a few hours of excited screaming from the kids (who were on an Easter egg hunt), we managed to have a nice day. The weather cleared up, we went to the beach and everyone settled down a bit.

So there you have it folks. Not all of my holiday stories are good ones but not all ‘bad’ holidays are bad, either. The Sparks met my family, I got to know the Baby Sparks better, I developed a sincere appreciation of how lovely my parents are with children and I now have nothing but respect for parents in general. There is nobody more hard core than someone who can get at up dawn every day, care for little people who know neither reason nor the alphabet for the purposes of Eye Spy, and who is able to give love and care, day in and day out. You people are amazing. Respect.

Kiama: A guide for families