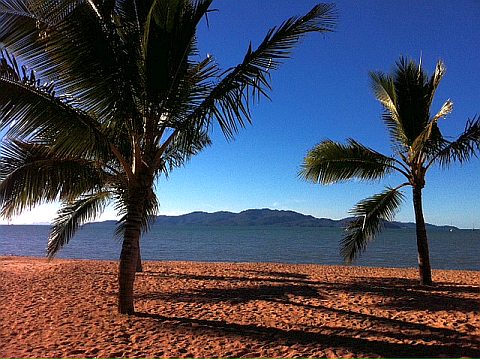 Townsville according to Greta Lackey Work trips … The early wake ups, the delayed flights, the crappy plane food, the late nights. I usually classify them under the category of ‘glorified stress’! But every now and then you visit a place you’ve never been before and you most probably would have never thought to visit, are pleasantly surprised, and it makes it all worthwhile!

This week I went to a conference in Townsville.

Where’s that? Well, it’s 1,300 kilometres north of Brisbane on the north-eastern coast of Australia. It’s actually the furthest north I’ve ever been!

Townsville is Australia’s largest urban centre north of the Sunshine Coast and has a population of 200,000. It is considered by some to be the non-official capital of North Queensland.

It is shadowed by a mass of red granite called Castle Hill and girt by a flat and glistening sea that is unfortunately teaming with deadly Yellow Boxfish during the warmer months.

It seems that visiting during the winter months is the smarter option. You CAN swim without fearing for your life and the daily temperature reaches a lovely (non-humid) 22-25 degrees. Absolutely perfect!

I was lucky enough to stay at Jupiter’s Casino, where gambling meets the sea. It’s located on one end of the peninsula with a perfect view of Magnetic Island from every room. Swimmers are not something I would usually pack for a work trip, but let me tell you, I wish I did! The large winding pool surrounded by palm trees and looking out over the sea would have been a perfect way to unwind after a long work day.

There is plenty to do in Townsville. Hike up the Castle Hill with a picnic to enjoy the views of the town or catch a ferry to Magnetic Island, which is only 8 kilometres offshore, for a relaxing day of exploring. See one of the largest coral displays in Australia at the aquarium. This aquarium is trumped only by the Sydney Aquarium in terms of water volume. I was told that the Museum of Tropical Queensland, which is a museum of natural history and archaeology, is also worth a look.

I was surprised that this small town was also quite cosmopolitan. Each night my workmates and I visited a new restaurant. We dined on pate, fresh crab, and oysters, while sampling fine European wine. Restaurants to try include the likes of the A Touch of Salt, Michel’s, Table 51 and Seagulls to name a few.

Although I didn’t have a chance to try this, I was assured that the best meal you’ll get in Townsville is actually from the local fish and chip shop. Grab some fresh hand cut chips, mackerel straight off the crawlers and head down to the huts at the beach to watch the sun set. ‘There’s nothing better,’ one of the local taxi drivers assured me.

And if it’s a good beer that you’re after, you will be pleased to know that there’s no shortage of watering holes. Most of these are located on The Strand, which is a long strip alongside the tropical beach.

Sitting in the taxi on the way to the airport, I couldn’t help but stare longingly out the window at the beckoning waves. If only I had one more day!

Have you ever felt you could have done with another day (or week) in a certain destination? If so, where?

4 comments on “Townsville according to Greta Lackey”