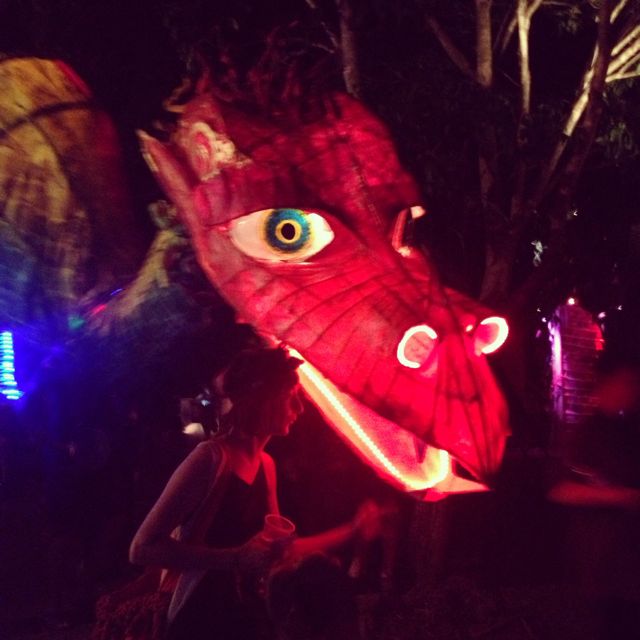 How much sweat can a sweaty sweater sweat? That’s what I asked myself as I downed yet another litre of sun-warmed water at Woodford Folk Festival. As fast as I was glugging it down, it was pouring straight back out of my face.

It was crazy hot, like Ryan Gosling and Channing Tatum’s impossible love child. The mercury rose and rose and rose until the sky spat daggers of lightning and heavily pregnant clouds broke their waters. It was dramatic. It was soggy.

The festival, an annual occurrence that just celebrated its 20th birthday, gets bigger, better, louder and hotter every year. I’ve been twice before and both times, come away feeling like Woodford was some sort of idealistic haven.

This year, not so much. I don’t know whether it’s age or wisdom, but Woodford has lost some of its magic.

I still love the program – especially the dance classes, talks, music and street theatre – but I found all the faux hippie-ness a little grating. All the glitter and butterfly wings in the world can’t turn a bogan into fairy princess.

There were plenty of real hippies with dreadlocks and well-loved footwear but there were also lots of posers slurping down green smoothies and wearing fake floral wreaths on their heads. I started playing a secret game of ‘Real vs Fake’ which is not in the spirit of Woodford at all.

The funny thing is that I am a fake. I walked around the festival trying to hide the logo on my Marc Jacobs bag, my shellac manicure glistening in the sun. My festival outfit? From Target. My snacks? Mass produced. Not a chia seed in sight.

Sure, I teared up during Bob Hawke’s democracy talk, I got excited about wild bee hives and committed to daily meditation but I also lusted after air-conditioning, comfy chairs and refrigerated goods.

I am not a hippie but Woodford makes me grateful for people who are. In the same way voting for The Greens pulls the government to the left, visiting Woodford every couple of years knocks a bit of cynicism, complacency and laziness out of me. It exposes me to the raw energy of creativity and in all that sweat, dust and sunburn, something takes root that informs the year ahead.

The best things I saw? TaikOz, Clare Bowditch, Darren Hanlon, Thelma Plum, Hot Brown Honey Burlesque and Dance Masala. The best thing I missed? Matt Corby. That’s the trick. Managing to see everything you want to see while still having the energy to enjoy it.

Have you been to Woodford Folk Festival? What did you think?