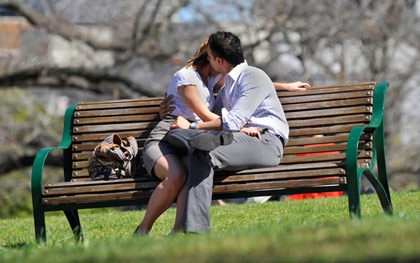 I want what you have

A friend of mine said this to me recently and I totally understand what she meant.

We were talking about relationships, specifically romantic ones, and she said that she is looking for something solid and lasting.

I felt exactly the same way before I met The Spark.

I’d observed as one of my friends, who I shall call the Movie Star, fell madly in love with a man she will soon marry. She crashed his party (in typical Movie Star fashion) and from that moment forth, went on a wild, romantic, around-the-world journey.

Now this man is not your average Joe – he’s the perfect extraordinary guy for my beloved Movie Star – but there were some challenges in terms of an age gap and his grown-up children.

Regardless, I watched as their love grew and I thought, ‘I want that’. Specifically, a truly passionate, deep love.

In seeking this, I experienced some challenges of my own and that is what I want to address here. If you are looking for love, here’s some hard won advice from someone who eventually found it.

1. You’re too fat
I had a colleague helpfully tell me that I should lose some weight if I want a boyfriend. Uh, no. I was the fattest I have ever been on my wedding day and you know what? It didn’t make a single bit of difference. You can starve yourself as much as you want and go crazy at the gym, if that’s what you’re into, but don’t think for a single second that being skinny will result in you finding a loving partner or, alternatively, that being fat will stop you. Also, have you seen what most people look like?! Perfect beauty is not the norm, it’s an aberration. Stop holding yourself to a false standard.

2. You have a past
To my horror, an old school friend of mine described me to a prospective love interest as having ‘a chequered past’. I have never had so much as a speeding ticket so I had to assume he meant my sexual history. Sure, it’s colourful and there are some experiences I would gladly retract but I am not ashamed of any of it. There is an insidious social concept that there is such a thing as ‘wife material’ and then there’s this other shameful, slutty thing that we should all avoid becoming (or admitting to). Any man worth your time is not going to judge you for what went before him (here is a beautiful poem by Pablo Neruda about that very thing) because that speaks to fearfulness, ignorance and contraction. Love energy is expansive and accepting and that’s what we’re going for here. Avoid anything else.

3. You’re too old/it’s too late
Ahh, that old chestnut. Too old for what? Too old to go on the kid’s slide at Wet ‘n’ Wild, I’ll concede that, but too old for a loving relationship? My nanna got married for the third time in her seventies to her self-proclaimed true love. We all get older and uglier with the march of time but we also get wiser, kinder and funnier. Your ass may be getting saggier but your mind has never been hotter. In the words of Elizabeth Gilbert’s mother, if you’re not dead yet, you’re not done yet.

4. You’re looking for a particular kind of guy
Of all the traps you can fall into, this is the worst. You have your blinkers on to anyone who does not fit a certain criteria. I have heard my friends talking about how they don’t want to date someone with kids, who are older/younger, who have a certain body type/job/pay bracket, etc. The list goes on. There’s a lot to be said for compatibility of goals and ethics – it’s essential – but the other stuff can be negotiated. If you’re avoiding meeting people based on a list you’re carrying around in your head, you are seriously limiting your options. On paper, no one would ever match The Spark and I. In practice, this is the kind of love that a battle-scarred cynic can really get behind. We may seem like the underdog team but we’re winning the championships!

5. You’re in love with the wrong guy
That guy you’ve been dating who has a $1000 a week coke habit? Or the guy who will happily show up at midnight to f*ck you but doesn’t show up to your birthday dinner? What about the guy who is separated but still married because it’s complicated? Or who is cheating on someone to be with you? Heads up – that guy is the wrong guy. I don’t care how much you think you love him. If he regularly makes you feel like crap and you turn into an anxious, needy, psycho lady under his influence, ditch him. A guy worth your time will make you feel like the best version of yourself, not the worst.

Whatever your fears, whatever your past, if you want what I’ve got, you have to get out there and meet people. That is the only way it’s going to happen. Commit the time, energy, resources and confidence to the process. Go on a million dates. Make a million mistakes. You’re not going to meet a partner sitting on the couch watching box sets.