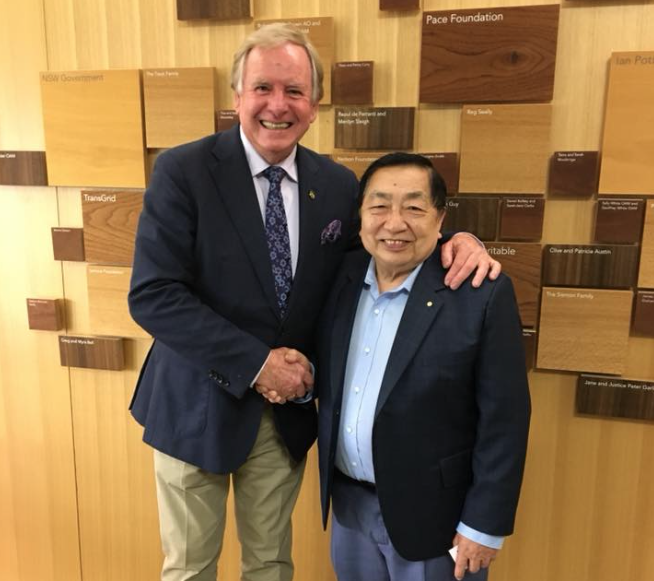 I just found out that my friend Harry died last night.

He was one of those people you’re always happy to see. I knew him through a Board I volunteered on (he was the President). This meant we usually saw each other at work-related events, but we would inevitably end up talking about our shared passion: gardening.

What was special about Harry is that he came from very humble beginnings. His parents were Chinese immigrants who owned a market garden.

The fact that he became a well-respected business leader and philanthropist came down to two things: a commitment to service and a magnanimous, all-encompassing kindness of spirit.

It may seem like an old-fashioned concept in a world of me and mine but Harry was all about serving the community. He also cared deeply about the environment, practiced organic gardening principles and had a genuine love of bees.

What I learned from Harry is that if you want your life to mean something – if you want to be special – look for ways to serve your community. Give, give and give some more.

I will miss his welcoming presence, his cheeky smile and our chats about gardening.

I wrote the article below for a magazine that folded before this story came out.

I count Harry Hunt among gardening greats like Peter Cundall. In fact, I count him among the human greats.

Vale Harry. You will be sorely missed.

In the garden with Harry Hunt

Harry Hunt OAM is a well-known figure in South-West Sydney. The lively 75 year-old has been running Hunts Liverpool, a 140-room hotel at Casula, for 50 years and all the while, he has been quietly gardening every chance he gets.

Harry Hunt  is best know for his extraordinary philanthropy, business success and involvement in the tourism industry as President of the South West Tourism Taskforce, but what many people don’t know is that he is a devout green thumb.

Growing up on a market garden on the NSW Central Coast, Harry learnt some important skills from his father who was an inventive, clever farmer. Harry says the family grew everything from citrus, through to passionfruit that they would deliver to the local Cottees factory in Gosford, and cauliflowers that were famously enormous.

“You could only carry one at a time,” laughs Harry.

The secret formula to growing these whopping brassicas was chicken manure and irrigation.

Fast forward to today and Harry has honed his gardening skills to a level of mastery. His home at Harrington Grove has numerous productive vegetable beds, and Harry has a secret garden hideaway at the hotel.

This hidden space has a greenhouse and a large number of ‘no dig’ garden beds set up on concrete.

To establish the beds, Harry says he uses multiple layers of wet cardboard, shredded paper, straw, sugar cane mulch, cow manure and top soil. He also uses a technique where he digs in kitchen scraps to compost naturally in the soil.

“The ginger has really taken off,” says Harry.

“I put in 100 pieces of ginger from last year’s crop and I’ve been feeding them worm juice from the worm farm. I’m expecting that each plant will give me between 1kg – 2kg of ginger,” he says.

Another success story has been Harry’s bitter and hairy melons that have fruited prolifically, as well as his telegraph cucumbers.

A current backyard folly is a dragon fruit tree that he has watched grow from a cutting to a two metre tall plant.

His gardens are planted in the style of a food forest, where there’s a productive understory of plants like herbs, eggplant, kale and red okra.

So what’s his secret weapon in growing this veritable feast?

Harry says it’s a combination of trace elements and fish pond run off. The hotel has a large koi pond so Harry has rigged up a system to siphon off the water at the bottom into a closed settling tank. He then uses it as fertiliser.

Harry’s other major passion is bees. He is a registered beekeeper and has a Flow Hive, as well as five Langstroth hives at his farm up on the mid-north coast. He is currently supporting the Australian Manuka honey industry.

“I believe that more information about Manuka Honey in Australia should be shared and promoted,” says Harry.