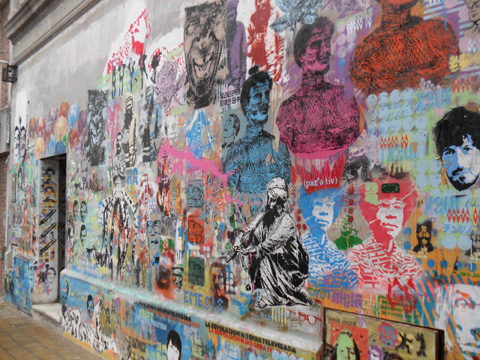 Lisa O’Brien gets high on aerosol in the city of ‘fair winds’.

The instructions in the email are simple: ‘Meet in Colegiales at the corner of two roads – Conde and Jorge Newbery.’

Colegiales is a quiet residential barrio of Buenos Aires, so this random intersection at first seems an unlikely starting point for the graffiti tour we’re due to go on the next day. Even in a city like Buenos Aires, where street art is more ubiquitous than street lighting, I had expected to be told to meet at a cafe, or a hostel, or a subway station. Somewhere where there are people.

But when we arrive the following afternoon, after a last minute dash to the bakery for some hangover-zapping empanadas, it all begins to make sense. Two of the four buildings on the cross streets are adorned with murals of cartoon-like characters and bright splashes of colour. I figure that even if we are going to meet an uncertain end, at least it will be in a festive setting.

Of course, we have no need to worry. In the four years since they have been running street art and graffiti tours around Buenos Aires, Graffitimundo has been recommended by the likes of Time Out, The New York Times, Lonely Planet and my friend Sonia, so they must be good. Proving the universal truth that no matter where you go in the world you will come across another Australian, our guide Kirsty is a fellow Sydneysider who had travelled to Buenos Aires a few years ago and fallen in love with a boy, the city and its art. She admits that she is not an artist but an art-lover, and her passion is evident in her wild gesticulations as she talks and the way she bounds off the bus at each stop. Even when the grey clouds overhead are fast turning into a torrential downpour, she insists on wrenching us from the warmth of our bus seats to get a closer look at this artwork or that – and it’s always worth it. This is an insight into the city that a thousand tango lessons will never teach you.

Over the course of the afternoon the tour weaves its way from Colegiales through the neighbouring districts of Palermo Hollywood and Palermo Soho. Kirsty fills us in on the history of various pieces and the stories of their artists. The street art scene in Buenos Aires exploded during the Argentine economic crisis of the early 2000s, when politically motivated murals began to spring up around the city. Since then, the police and locals have embraced street art with many businesses going so far as to commission work for their buildings. The scene in Buenos Aires is dominated by a handful of artists who have almost become celebrities in their own right over the past decade, recognisable by their unique styles and street pseudonyms. The tour includes a stop at one of the studios used by many of the artists – a cavernous warehouse space complete with resident cat – but when we call in this afternoon it is mostly empty.

After a few hours the rain calls a premature end to the walking part of our tour so we seek refuge at Hollywood in Cambodia + Post Bar, the city’s only street art gallery and bar. At the gallery I’m fortunate enough to meet one of the artists, Stencil Land, but with my limited Spanish and his non-existent English we don’t get much further than polite greetings and big smiles. But in a way that’s enough, because his art and that of his colleagues has already shown me the heart of Buenos Aires.