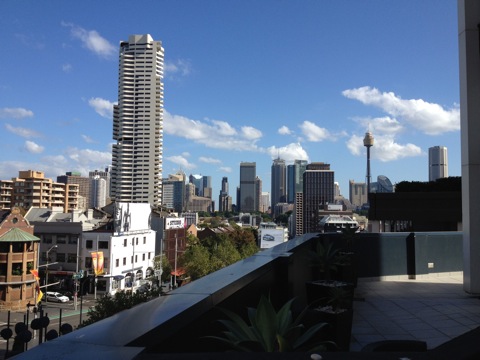 The Diamant Hotel and TEDx Sydney 2013

Being selected to be in the audience at TEDx Sydney 2013 rocked my world but presented some logistical challenges. I live in Tamworth. TEDx was in Sydney. I subsequently planned a mental couple of days catching up with friends and attending the conference, all with a nightmarish Greyhound commute thrown in. It was exhausting to even think about.

Fortunately, the very quiet, very peaceful Diamant Hotel stepped in and offered me the chance to review their Potts Point property.

Located a short stroll from the CBD and an even shorter stroll from the nightlife of Darlinghurst, The Diamant is everything you want in a city hotel. The slick interior makes you feel all New York-y while the young, friendly reception staff remind you that you’re in sunny, outgoing Sydney. There’s no pointless frills that you don’t need (ie breakfast buffet – why bother – there are a million cafes downstairs) but the nice stuff – Lindt chocolates on arrival, iPod dock next to the bed, a private deck that overlooks the city lights – is all still there.

Also – and this is a major bugbear of mine – there is a notable absence of ugly hotel room art. Instead, there’s a black and white framed photo on a velvet flocked black and white wallpaper feature wall. Eyeballs = happy. Aesthetic sensibilities = unoffended.

The thing that impressed me the most? The beds. I don’t know where they got them but they are MAGICAL. Sure, I was tired and hungover but these beds were cosmically comfortable.

Whether you’re partying or behaving yourself (and I highly recommend behaving yourself the night before TEDx … do as I say, not as I do), The Diamant is the ultimate Sydney landing pad for keeping your head straight so you can make the most of your time in the big city.