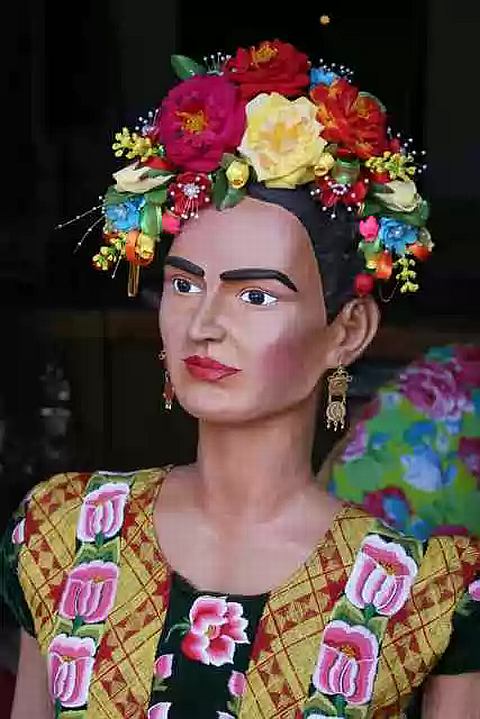 When Frida Kahlo was 17, she smashed five vertebrae in her lumbar spine. Her home, Casa Azul, and the artworks within it, bear witness to her agony. A plaster cast of her tiny frame becomes a strange ornament; a creaky wheelchair sits idles in front of a lowered easel. Papier mâché skeletons leer from corners and x-rays showing vicious metal pins are illuminated on light boxes.

The same accident that claimed Frida’s back also destroyed her fertility. A medical poster showing the stages of embryonic development hangs on her studio wall. In the words of her husband, Diego Riviera, Frida was the first artist to, ‘Slash open her breast and heart and reveal what was happening in them.’ Her distress is palpable.

The final torment in her life was Diego’s legendary philandering. In a photographic exhibit titled ‘Amor’, it seems as though the pair were locked in a battle of tits for tat. This lipstick-stained archive is studded with Hollywood actresses, directors, photographers and artists. Because of Frida’s bisexuality, it’s impossible to know who belonged to who but the upshot is that they were both prolific in their counter-attacks.

In the kitchen of Casa Azul, a motley array of indigenous and Spanish colonial ceramics line the walls. There is a friendly chaos to the clutter; a bohemian warmth. What I would give to help Frida chop jalapenos or drink tequila in that room with Fu-Lang, the pet spider monkey, clinging to my shoulder.

Her bedroom at Casa Azul is a peculiar combination of childishness and austerity. A frilly embroidered cushion sits atop a white crocheted bedcover on a single four poster bed. Above the pillow, there is a mirror that Frida used for self portraits when she was bedbound. The wall features a portrait of Stalin, Lenin and Trotsky and her bedside table is a mess of religious paraphernalia.

Frida’s world was one of vibrant colours, violent sorrows and political zeal that was lived out for over 30 years within the walls of her father’s blue, blue house. The dappled courtyard with its mosaic ponds and miniature Mayan pyramid must have offset Frida’s physical imprisonment to some degree but despite it’s beauty, this house was an infirmary for most of the time she lived there.