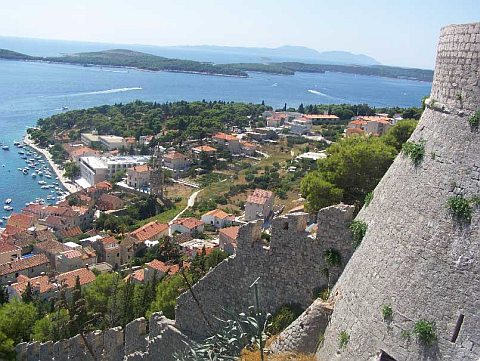 As we arrived on a humid evening late last year, stepping out of the fluorescent orange glow of our easyJet tin can and into the soupy air hovering on the Split tarmac, Croatia had a big reputation to live up to. Any conversation about this burgeoning eastern European country in the preceding months had been full of the type of gushing normally reserved for Jude Law or Bourke St Bakery’s chicken & fennel sausage rolls. Every single person we met who had been there couldn’t wait to tell us how much they loved it.

One friend had penned an email of nearly 2000 words to tell us how we MUST GO here and CAN’T MISS there, and that he had already planned the exact spot on the pretty Adriatic coast where he was going to propose to his girlfriend.

My boss – who worked in the travel industry and had been just about everywhere – enthusiastically rated it as her favourite country ever when I politely enquired as to her holiday there.

An American colleague announced she would be cheering for the Croatian football team during the World Cup qualifiers and had even bought a scarf in team colours, so much so did she care about the Croatian people and, apparently, their chances of getting to South Africa.

And just a few short weeks before we flew out, a sarong-clad Catriona Rowntree had also given it the thumbs up.

Like I said, Croatia had a lot to live up to.

All travellers hit the road with a certain amount of expectation about what their journey will hold, often influenced by the tales they have heard from other travellers. What City X or City Y will be like. What their hotel will be like, having read a few eyebrow-raising reviews on TripAdvisor. What meal will be served over Dubai, and whether they will have identified it by the time they touch down at Heathrow (unlikely). It’s these balloons of expectation that bubble up inside and make us prone to squeals of excitement in the weeks and days leading up to a trip, but they can also be deflated in an instant.  And the more they have been pumped up, the more prone they are to popping.

Four years ago, on my first trip to Europe, I was breathless as I walked through the revolving doors of Paris’ Orly airport, onto the train and into the heart of the MOST ROMANTIC CITY ON EARTH. But wait. Where was my French lover bearing the glass of Bordeaux and buttery croissant? Where was the real Mona Lisa? Surely these throngs of people were not here to stare at that tiny postage stamp-sized canvas on the wall over there? I had a great time in the French capital but I couldn’t help feeling the tiny pinprick each time my expectations, pumped up to bursting point by Hollywood and just one too many novels featuring a tres chic Parisian patisserie, were let down just that tiny bit.

As for Croatia, it did the impossible and lived up to every unfeasibly high expectation that had been set for it. I can’t put into words how much this beautiful country has stolen my heart and made me yearn for its crumbling old towns, for its vitalising Adriatic lifestyle and for the warmth and friendliness of its people.

But you must go. Now.

Lisa O’Brien is the associate publisher of the Australian edition of Travelzoo, a website that specialises in providing consumers with the very best travel deals in the market. The hottest deals are handpicked and published every Wednesday in the famous Travelzoo Top 20™ e-newsletter.

As a journalist, Lisa has written for publications including Time Out Sydney, TNT, Girlfriend, MANIA and Blue Mountains Review magazines, as well as Online Opinion and Macquarie Network’s Amazing Australians website. She has also worked as a production intern at The Sydney Morning Herald.

Lisa holds a Bachelor of Arts in Communication (Journalism) from UTS and is currently completing a Master of Arts in Journalism at the same university.