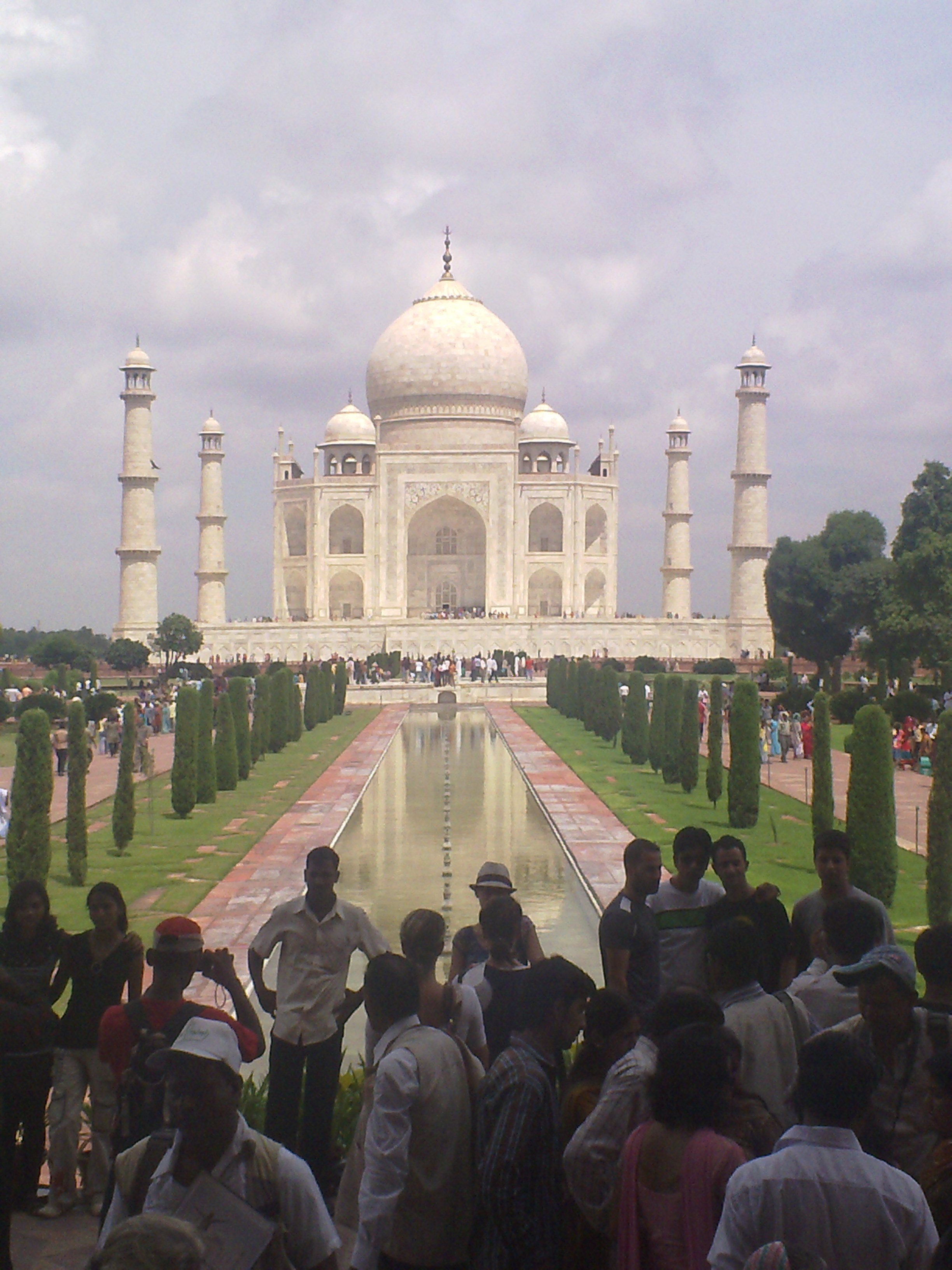 Pilgrimage to the Taj Mahal by Josh Bryer Pilgrimage to the Taj Mahal

I woke up at 5am to leave plenty of time for my 6.30 express train (2 hours) to Agra –home of the Taj Mahal. The train trip was pleasant – comfortable, with AC and free newspapers, and they fed us with tea and biscuits, then a light breakfast. We rolled into Agra at 8.30am, where a sea of Auto-Rickshaw drivers (I’d been erroneously calling them ‘tuktuk drivers’) greeted us.

For some reason, I didn’t feel like doing the typical tourist thing, and decided to walk. I had two big bottles of water, and all the time in the world, since my train back was leaving at 8.30pm. It was a good way to kill time, I thought (in a good way) so I fended off about 50 offers for lifts and walked the whole 9km to the Taj Mahal – much to the amazement of the locals. I was the only tourist walking it. Maybe ever.

Two  hours later, I arrived – footsore and sunburned (and not feeling quite so clever anymore) at Red Fort, thinking I was at the Western Gate of the Taj Mahal – where I saw a sign saying ‘Taj Mahal 1.5km —>’.

So a total of 2.5 hours later I got the Western Gate at last, where I was accosted by kids. I gave away six of my ten pens in no time at all, though I didn’t manage to snap photos of all of the kids in the ensuing mad milieu – in fact, three of them kind of ran away, for some reason – perhaps I smelled after 9km of walking?

The queue to get into the Taj Mahal grounds was huge (the men’s one – there was a separate queue for ladies, shorter, which moved quicker … they have a lot of respect for women here, with preferential seats on trains etc, that is old fashioned, chivalrous and great …). So I stood, and stood, pouring with sweat, feet aching – and after another hour, I was in.

Well, talk about unbelievable. The Taj Mahal really takes your breath away. An elegant domed magnificence rising through the air like a dreamcloud from the mind of an angel-architect. I sat down on a bench and just stared at it for ages – then walked around the gardens and looked at it from every angle I could – I just couldn’t get enough of it, that’s all I can say. I’ll let the pictures do the rest.

And when I’d eventually had my fill, it was lunchtime. By now I knew the best plan on a hot day was to hire an Auto-Rickshaw driver and let him guide me – so I walked towards the rank and was approached by a guy in his 50s with orange-died hair who called himself Laka.

‘A good local restaurant, please,’ I said, ‘With good food at reasonable prices.’ And I got it. Arguably the best Chicken Tikka I’ve ever had. Although who can tell if the sunstroke and dehydration made it all the more deliriously tasty?

Anyway, it was damn good.

All the while, Laka waited for me outside. ‘Where to next?’ he asked, and then I realised that for 500 rupees (which we quickly agreed on) there was no issue with how to kill time ’til my train.

– an Internet cafe where they served chai

– a beautiful park to chill for a bit

– and last but not least, a 4-story rooftop bar by sunset, where I soaked in the last rays glinting off…

Just me and a Kingfisher Lager – with the whole view to my own. The perfect end to my day in Agra.

So I’ll end it there. Except to say that once again, an Auto-Rickshaw driver was the recipient of pens. 3 comments on “Pilgrimage to the Taj Mahal by Josh Bryer”