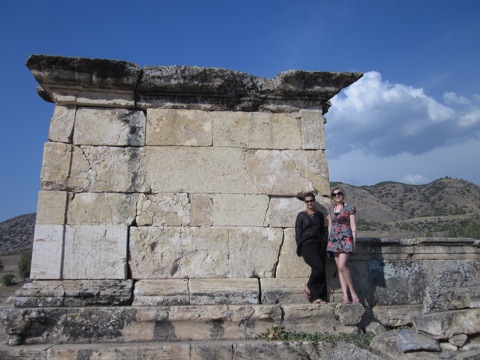 What Tour Company did you travel with?: Topdeck Tours

Where did you go?: Turkey – starting off in Istanbul, with an overnight train to Ankara, we spent two weeks on an epic bus trip through Cappadocia, Konya, Pamukkale, Kusadasi, Gallipoli, Canakkle and back to Istanbul. The name of the tour was Turkey Explored.

Who was your tour leader? What was he/she like?: Our tour leader was Turkish, so he knew a bit about Turkey, but that seemed to be where his knowledge of our tour ended. His common response to “where to next?” was “Maybe we go…”

What was the highlight of the trip?: Hot air ballooning over Cappadocia. The 3am wake-up call wasn’t too much fun, neither was waiting on the side of the road for the truck to pick us up, without our trusty tour guide, who was still asleep. Banging on his door wasn’t too much fun but watching the sunrise over the rock formations definitely was.

And the lowlight?: A bout of food poisoning in Cappadocia, I’ll never forget one of the other members of the group telling me she had “somethin’ brewin’, and it could go either way.” I wasn’t sure what she meant until the next night, when it was my turn.

How was the food?: See above. It took me about a week and a half to discover pide was regional Turkey’s pride and joy. And tasty too. I loved the four foot long wood-fired Etliekmek in Konya – flat bread pizzas sprinkled in spicy meat and peppers.

And the accommodation:? Everything from cute cave hotels in Cappadocia to faulty lifts in Canakkle, Turkey is a mixed bag.

What modes of transport did you experience?: The overnight train was an adventure to be slept through and the bus wove its way across the roads of Turkey.

What were your group like?: For a big bus, we had a small group of a dozen. Mainly women, Aussies living in London, looking for a few weeks away from the cold and some time in the hamman spas. We all got along fabulously. The two men in the group did their fair share of body guard and bus boy time but I think they liked it. I was travelling with one of my best friends Francine – she’s Greek Australian but the locals loved her, proclaiming her Turkish everywhere we went.

Who would you recommend this tour to?: Someone who wants to see Turkey like the locals, without the hassle of driving themselves around the country. Someone who doesn’t mind finding out info from their Lonely Planet rather than the tour guide at the front of the bus.

And who should avoid it?: Someone who wants a tour guide who knows everything.

What was your overall impression of the tour and group?: The group was great and the itinerary of the tour was good too – it was just a shame the guide didn’t have it all down pat. I thought he’d redeemed himself on the drive to Gallipoli by whipping out the movie Gallipoli, but then he realised he’d left the disc at home … The tour worked for me because I hopped on and off to go do some travel stories and the guide was happy to take suggestions on where and when to go places for the best light – everyone was pretty happy when they saw how much better their happy snaps were at sunset rather than midday at the white limestone pools of Pamukkale.