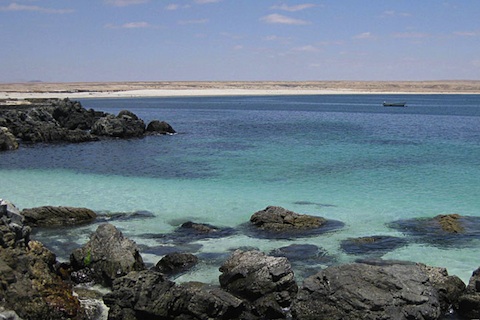 Bahía Inglesa is a tiny village located near the port of Caldera in Chile that’s home to one of the most beautiful beaches in the country. Only a few hundred people inhabit the town, with Bahía Inglesa becoming a tourist mecca in the holiday season.

We were there in early January just before the crowds and had no problem securing real estate on the sand and at the restaurants overlooking the clear aqua water. And if there’s one thing the people of Chile know how to do, it’s food. Little old men and women wander up and down the beach selling hand-made deliciousness in the form of traditional pastries, chocolate stick rolls and the toffee apples of your dreams.

But the local treats won’t be the only thing keeping you on the sand. The desert temperatures may have been sitting at around 35°C, but the ocean was like ice. Spend more than five minutes in and you’ll feel an aching, almost numbing feeling deep within your bones.