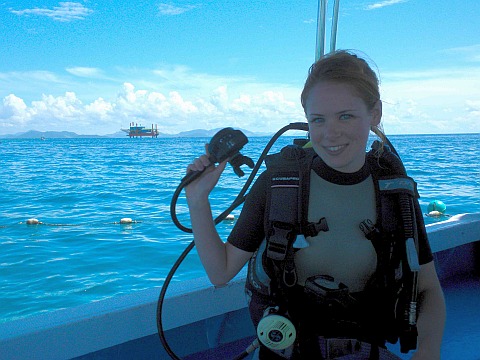 Favourite travel destination?: City – Tokyo/Narita: the culture is so diverse, even among the different suburbs. There is something for everyone, every age, of every interest. You can go clubbing at all hours of the day and night, shoot the most realistic BB guns you’ll ever see, buy absolutely hilarious toys, play in eight storey arcades, participate in tea ceremonies, wander perfectly manicured gardens, eat and drink to your hearts content and buy novelty-sized EVERYTHING. I have a penchant for novelty sized items..

Country – Malaysia: probably because my main experiences there were so incredible. Diving (scuba) from an oil rig in the warmest, clearest water I’ve ever seen, climbing a mountain, and eating some of the most incredible food of my life. Also I have to say – it’s dirt cheap, even the good stuff, so a minimal budget goes very far.

Worst travel experience? What happened?: Using a staff travel ticket to get from Sydney to Seattle. The ticket was only valid on certain carriers in the states and your priority (ie where you are in the queue to get a seat should one be free) is called ‘class z’ meaning the absolute BOTTOM of the pile; the janitors at the airport will get a seat before you.

Anyway this ticket meant I had to fly Sydney – LA, LA – Dallas, Dallas – Seattle. I wasn’t able to get a flight for LA – Dallas for 12 hours after I arrived in LA and then when I got to Dallas they informed me there were no spare seats for staff for the next three days and no, they wouldn’t supply me a hotel room for the night.

So yeah, worst travel experience… I did make it to Seattle in the end though and had some seriously kick@$$ Mexican food in the Dallas airport.

Best tips for beating jetlag?: I say that I don’t get jetlag; I think it’s a state of mind. When the pilots announce the time at your destination I just tell my brain to forget what time it was where I came from. Reset your clocks and believe that the time you see on your watch is the time it is, go with it. Do everything you would normally do at that time and you’ll be fine.

What is the one thing you don’t leave home without?: A camera. I use a little Nikon Coolpix point-and-shoot when I travel. It’s tiny, takes great ‘on the go’ shots and has a quick ‘turn on’ response time. That means I don’t have to waste my holiday / travel looking through a lens, setting up a shot. I don’t even have to look at the screen with this one and I know it will snap a little reminder of a great experience for me.

Oh, and I never travel without a pen, a bandaid, a rubber band and a tissue. You never know when these will come in handy, but they always do.

Do you stay in touch with people while you’re travelling?: I try to but it’s always hard due to time differences, schedules, and all the things you’re doing. I think SMS is a great thing. It’s simple to send and you can get ‘global sim cards’ these days which work from all different networks.

I also use Skype to talk to my family who live in the USA. It’s cheap, effective, and I can hop onto it pretty much anywhere.

Best meal you’ve ever had while travelling?: Ooh, now THAT’s hard. The first time I went to Tokyo was with my boyfriend at the time and we decided to spend 35 hours awake to try and get the true ‘sensory depravation tokyo’ experience. About 16 hours into it we were STARVING and in Ginza. We went into a few restaurants but they either a) didn’t have any English on the menu or b) didn’t have photos of the dishes and since neither of us were up for a surprise serving of ‘intestine a la mode’ we decided that the first menu either with pictures or in english we came across, we’d eat there. Down a place called ‘Pacman Alley’ we found a little menu sitting on a stand at the top of a set of stairs. It had pictures, they looked pretty good and we decided to venture down. What we found at the bottom of the stairs was the most stunning, cosy, warm Japanese restaurant with the best (and cheapest!) Japanese food I’ve ever had. We ordered every dish on the menu and way too many shochu cocktails and stayed there for about four hours. The tuna and avocado sashimi with thickened soya sauce melted in your mouth; I think I had three servings. We both vowed to go back someday and I took a photo of the address to make sure I could.

I have to give honourable mentions to the salt and pepper squid at Mui Woa (Hong Kong), the pommes frites in Seattle, Pink Chilli Vietnamese (also in Seattle), spam sushi rolls (Hawaii) and just-caught tuna sashimi on Sipadan Island (Sabah).

Best kiss?: Tied. At the top of 4,095.2m high Mt Kinabalu at dawn or when my boyfriend motioned for me to take out my regulator (breathing aparatus) to kiss me while diving in the Sipadan reef next to two enormous sea turtles who were swimming hand in hand, just like us.

Best/scariest/funniest drive?: My very adventurous ex-boyfriend and I travelled to Sabah together. We rented this tiny little car which we called ‘the Zephyr’, it came up to my 6” boyfriend’s waist. We joked that one of us would have to get out and push it up the hills and you had to turn the aircon on to build up power at the base of a hill then switch it off quickly, like an extra gear, to propel the little thing up the final spurt. It also meant we made ‘zooming’ noises when going down hills and it led to some very funny photos.

Incidentally – the residents of Sabah cannot drive, and many ride bikes or motorbikes. This made it even more fun.

What has been the big WOW moment of your travelling life?: I actually cried while watching the sun rise from above the clouds on the summit of Mt Kinabalu, sitting outside the safety ropes with my feet dangling over a 2,000m sheer drop. The last 200m of the climb was the hardest thing I’ve ever done and the accomplishment, along with the view was absolutely breathtaking … I’ll remember that until I die.

Image caption: Getting ready for a dive at ‘shark point’ near Sipadan in Sabah. The sharks were white and black tipped reef sharks, I made friends with an eel who lived in a toilet, the water was warmer than the air outside and that little thing in the background is the oil rig which was the accommodation.

Denea is the Publisher and Editor-in-Chief of GourmetRabbit Magazine