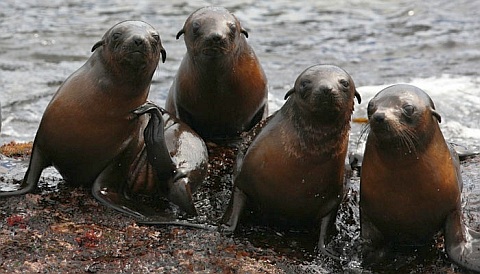 I would like to believe in mermaids, I really would, but after watching a colony of fur seals at play it’s very easy to come to the conclusion that sailors:

a) Drink a lot of rum

b) Have poor night vision

Seals, when they’re tumbling around and flipping their tails out of the water, look very much like these ethereal sea creatures. They pop their heads out of the water in the direction of the boat and then shoot under the surface, only to reappear impossibly far away for the time: distance equation. They are the epitome of athletic grace and yet they smell like a sewerage works. I guess you can’t have it all.

I was lucky enough to visit a fur seal colony as part of my recent trip to Phillip Island. It turns out that the seal watching cruise is the easiest thing in the world to organise. All I had to do was rock up to Cowes Jetty and buy a ticket at the Wildlife Coast Cruises office, conspicuously located in a lighthouse, and then walk along the jetty and wait for the boat in 7000 knot winds. The weather at Phillip Island, I discovered, is known for having a bit of an attitude problem.

The two hour cruise takes you along the rugged coastline of Phillip Island which incidentally, looks a lot like Akaroa in the South Island of New Zealand.

There are two major highlights on the cruise: the seals (because they are so damn cute) and the Sara Lee banana cake they give you on the return trip.

To check out a video on Wildlife Coast Cruises, please click here.

I also saw penguins but more on that later …

To read more about my cute-seeking expeditions, check out this story http://shegoes.com.au/featured/local-colour and don’t be shy about sharing your tips for the best cute spotting places in the world.