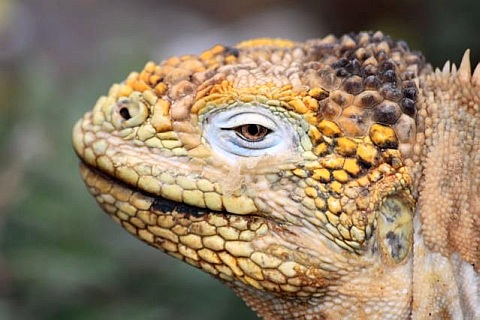 As contributors to this blog would know, it can be a ridiculous task trying to put an amazing travel experience into words. Where do you start, what do you leave out, what do people really want to know?

Because I have no idea how to answer those questions, I offer instead a list of things I’m most commonly asked about my 10-day cruise around the Galapagos Islands. As a bonus, I’ve also included what I usually say in return.

Q: Where are the Galapagos Islands?

A: The islands are about 970km west of Ecuador. I flew to the capital, Quito, then flew to Baltra, the gateway to the islands. We then got a bus to the dock and our home for the trip, the Yate Darwin.

Fun fact: There are 18 main islands in the group.

A: Hot and steamy. Coming from Oz, I thought I’d be fine with a bottle of SPF 30+ and a tube of aloe vera. Estúpido me. One of the first things our guide said was, “Anything below SPF 100 is useless.” Of course, this was after we were on the boat, when we wouldn’t be seeing another shop for a week, so much sunburn ensued. It actually shouldn’t have been a surprise: we were, after all, on the equator. And we were there in April, which is the hot season. Although most of the activities (walks around the islands, snorkelling) were over before 10am and began again around 3pm, the sun seemed to take pleasure in frying any momentarily uncovered body part. It didn’t really rain during the day, so swimming was pretty much the only way to cool down.

Fun fact: Hot/rainy season is January to April, and the cool/windy season is May to December… but there’s really only about a 3°C difference between the seasons.  Weird, huh.

Q: Did you see lots of animals?

A: Totally. Iguanas were on every island (marine and land varieties) – you have to be careful to not step on them. Sea lions were also more than abundant. There were more species of bird than I would ever be able to remember (the blue-footed boobie and waved albatross were my faves). The giant tortoises were awesome – you just don’t realise how truly giant they are until they’re coming straight at you with a maniacal look in their eye and a murderous weapon in their mouth. I kid. But they sure are huge.

Fun fact: There are 10 subspecies of Galapagos tortoises left in the world (there used to be 12 – and there’ll soon only be nine, as there’s only one tortoise left of one particular subspecies. Poor old guy).

Q: Is anyone looking after the islands?

A: Conservation is important to the government, and the islands and wildlife are pretty well protected. Each year, all tourist vessels have to register with the Galapagos National Park. The boat is then given a schedule that details where it can go, and when (to the point they can be told to go to Island A in the AM and Island B in the PM). It means there aren’t too many shiploads of visitors at any one place at a time – which is great when there are already 20 of you from one boat jostling to get the same photo of a flamingo from the exact same position. We rarely came across more than one or two other boatloads of turistas on any one island (except when we visited Santa Cruz, the island with the biggest population of humans).

Fun fact: About 23,000 people live in the Galapagos Islands.

Q: What was your favourite bit?

A: Playing with the sea lion pups. When you do somersaults in the water, dive down and just act like an idiot, they really do seem to wait until it’s their turn then do something similar in return. But drinking a cold beer, overlooking a golden sunset with no land in sight, a handful of frigate birds circling overhead, was pretty damn special too.

Fun fact: I would do this trip again in a second (money permitting!), and plead with you to get there when you can, too. You won’t be sorry.

I travelled with Geckos, doing the Ecuador Wildlife Discovery tour. Check out some of my photos on my FB page. And ask me more questions here if you want to know more!