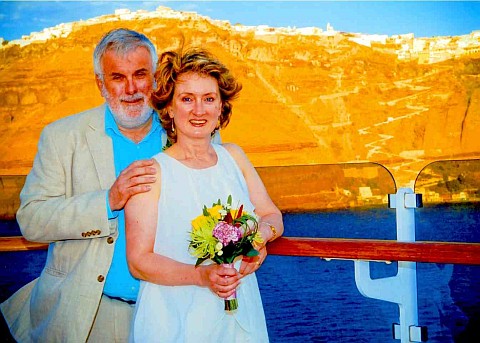 The music is all around us by Genevieve Frew The Music Is All Around Us

Prior to a recent overseas trip, I prided myself on being organised enough to download my iPod songs onto my new iPhone (OK, my thirteen year old did if for me) so I could enhance my travel experience with just one single accessory.

So much for that idea!  In Dubai – the compulsory stopover for our Emirates flight from Melbourne to Venice – I dropped theiPhone on the floor of the airport lounge.  Then BAM!  No more access to the modern world.  No more telephone, no more internet, no more photos and no more music!  I had really been looking forward to remembering this trip through song, as I have correlated many past journeys with particular artists or albums.

Some of the memories in the soundtrack of my life are bittersweet and mark moments of loss.  It is difficult for me to hear any Howard Jones music now without being back in Brisbane for the last family visit before my grandfather died.

But then there are the moments of wonder and awe I experienced when I decided to see the world in my early twenties.  I left Australia with no music, just a ridiculously heavy backpack.  The playlist of that journey did not begin for quite some time; not in England, where I had a great time visiting friends; nor in Ireland where I spent a lot of time in welcoming pubs.  There was no music for me in France, where I just felt scared, nor in Italy, where I was busy eating gelato and sipping late night cappuccinos (no wonder I couldn’t sleep…)

The music came in Athens when I met an American girl (one of many) who owned a blue Sony Walkman, and a cassette of Peter Gabriel’s ‘So’ album, that had just been released.  That music was so evocative and hauntingly melodic, it seemed as though it were written just for me.  Each track had it’s own tale to tell and became more poignant and beautiful the further east I travelled.  I played that one cassette over and over and over again and surprisingly, the American let me keep it…

Now, almost a quarter of a century later, that album still has a profound effect upon me, and transports me back in time and place.  When I hear ‘In Your Eyes”’I can feel the volcanic sand of Santorini’s Parissa Beach burning the soles of my feet.  ‘Mercy Street’ makes me want to jog again, along the foreshores of Marmaris (on Turkey’s south-west coast), where boat masts sound like bells ringing in the wind.  And ‘We Do What We’re Told’ brings back the terror of being the only English-speaking passenger on a midnight bus from Istanbul to Greece – stuck at the border crossing for hours whilst armed guards made us sweat in the cold night air.

Music has given me other memories of travel too.  In my late twenties, John Farnham and Margaret Urlich CDs had me laughing and singing out loud as I drove around New Zealand’s North Island in a rusty old Nissan Patrol with an unemployed electrician.

Sometimes the music can make an indelible impression on your holiday, even when you don’t want it to.  On a family skiing trip to Japan in 2003, we made our way up to Niseko, on the northern island of Hokkaido.  It was March, and right at the end of their season, but we were blessed with loads of virgin powder with hardly any other skiers to share it with, let alone any other westerners.

As we had five children with us we repeated our trips up the chairlift many times over those two weeks, and all to a very limited musical loop blasting out from icy speakers.  The song that stood out however, was the Dixie Chicks singing their cover of Fleetwood Mac’s ‘Landslide’.  Was it a Japanese lift operator with a sense of irony or just an automated system at the end of the season playing for a handful of ski nuts?

Despite my recent disappointment with the malfunctioning iPhone for my Mediterranean Highlights cruise, I really can’t imagine what music could have possibly enhanced some of the joys of this journey.

Such as arriving in Venice for the first time and taking in the breathtaking vistas whilst being whisked to our hotel on a water taxi.  Also, being able to take my mother on an overseas holiday with her only grandchild.  Then there was a moment of sharing tea in Kusadasi with the Turkish carpet salesman I had met 24 years earlier.  And the zenith of my trip was renewing my marriage vows on board Cunard’s Queen Victoria, with Santorini’s yellow cliffs as the backdrop for our ceremony and photos.

Yes, music can be a wonderful addition to any journey, but don’t despair if technology lets you down; ‘The music is all around us!  All you have to do is… listen!’ (from the  ‘August Rush’ soundtrack).