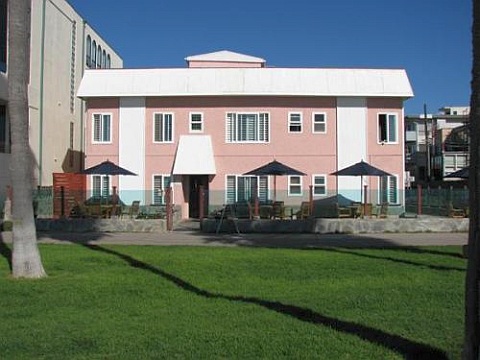 LA is big and trashy and fun, like a 6ft tall lap dancer who is really an actress.

We are currently staying at the Venice on the Beach Hotel which is right on the water. This former flophouse has been converted into a bright, fresh and inexpensive hostel, complete with wi-fi in the rooms, free coffee and tea and a very gracious host named Greg who is The World’s Most Helpful Man.

The past two days have been a blur of cholesterol, sunshine, tourist attractions and driving. I feel like the GPS and I are old friends. I am tolerant of her mispronunciation of ‘Wa-ah-shington’; she puts up with my inability to tell left from right.

We visited Universal Studios yesterday (Tuesday) which was like a ghost town. I guess this is the city that sleeps, as opposed to that other glittering gem on the east coast. We arrived at 3pm, forked out our $80 and dashed around trying to do as much as possible. First stop: back lot tour. Highlights: King Kong in 4D, driving down Wisteria Lane and The Simpson’s ride that was 100% pure awesome (there is one part where Maggie puts you in her mouth and sucks on you like a pacifier. You can smell baby powder – genius!).

NOTE: On the drive over there, we spotted the guy that plays Hornblower pushing a pram. The First Husband tried to get me to yell out to him, claiming that he would be happy to be recognised because no one in America would know who he was. I refrained. End of celebrity anecdote.

Last night, we made the excellent decision/giant mistake of going to Taco Tuesday at Cabos Cantina. This fine American establishment serves something called a ‘Mega-Margarita’ which is essentially three margaritas in a glass-shaped bucket.

Like all things I later come to regret, I have a weakness for margaritas so we stayed, ate tacos (which were surprisingly great for the price) and drank giant cocktails. Allegedly we consumated our marriage but unless there were witnesses, I can’t be too sure (that’s a joke Dad!).

Today was a slow starter, thanks to the Stilnox (c/o- Dr Aubrey) and the Mega-hangover. Not to be deterred from enthusiastic sight-seeing, we jumped in the car and drove over to Hollywood Boulevarde this morning for lots of oohing and aahing over tacky things. The First Husband took at least 35 photos of footpath stars while I helpfully chimed in with, ‘They’re going to be really boring photos’.

We also went to the Betty Page shop where I spent way too much money on a 1950’s dress, a leopard print garter belt, stockings and a book on how to do vintage hairstyles. Yes, I am becoming an eccentric old woman who lives in a (very cute patent leather) shoe. My theory is that if you can’t be thin, you can at least be distractingly interesting.

Speaking of thin, I just ate a burger and fries for lunch and two pieces of pizza for dinner. The reason for this is that I couldn’t face more Mexican (see: Taco Tuesday) and there are apparently three choices of food at the neighbourhood restaurants in Venice Beach. You guessed it – burgers, Italian, Mexican … oh, and icecream … which I have eaten loads of and am considering giving up all other food groups for. The icecream here is worth getting diabetes for.

Here is a summary of LA. Think of it like beat poetry …

Big burning sky and neverending fast food outlets. 10 lanes of traffic. SUVs. Nude girls in neon and the Hollywood sign on the hill. Lapband billboards promising miracles. Chinese Theatre with star’s writing, feet and hands. Elizabeth Taylor’s signature is elegant. Arnie wrote, ‘I am back.’ Madame Tussaud’s with plastic surgery gawkers less real than the wax. Costume shops next door to kinky lingerie stores (hard to tell the difference … you know what they say about fancy dress).

I feel like a kid who has had too much sugar. This city gives me a headache but I’m not ready to leave the party just yet.

Tell me, wise friends, have you been to LA? Do you have an LA story you would like to share?