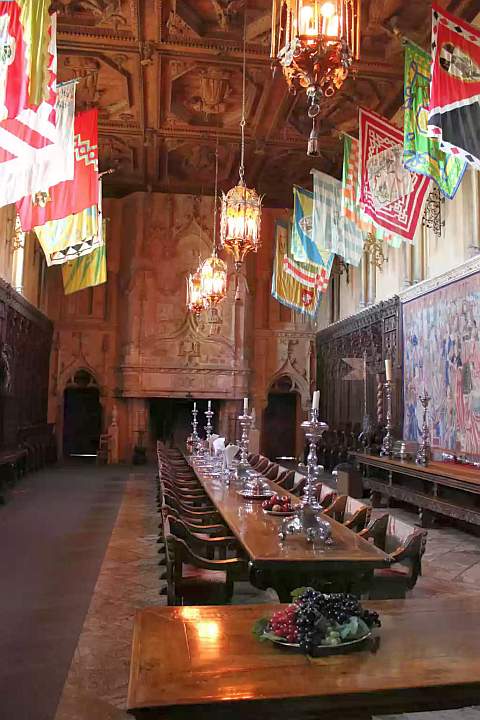 I was expecting something really garish, like Liberace and Zsa Zsa Gabor’s mongrel offspring but, once again, America surprised me.

Hearst Castle is utterly beautiful. In the words of George Bernard Shaw, it’s what God would do if he had the money.

Rising up from the eerie and ever-present fog of San Simeon stands a sandy-hued monolith, as out-of-place in this barren, windswept landscape as a ballerina in a moshpit.

A five mile drive up a winding road takes you to the marble steps of this unlikely palace. For USD $24 pp you can book a guided tour that includes bus transfers and an encyclopaedic host. We got Bill. He was funny, thorough and, most importantly, loud.

Walking through the property, you pass a Roman swimming pool, 3500 thousand year old stone Egyptian sphinxes, fifteenth century Flemish tapestries (commissioned by the King of Spain – the replicas hang in the Louvre) and all manner of Rubenesque marble statues, including some works designed by Rubens, hence the Rubenesqueness-ness. It’s totally gobsmacking.

I was forced to watch Citizen Kane repeatedly in Film 101 and this old cinematic chestnut gives you the impression that William Randolph is a bit of a freaky nutjob, stalking around muttering ‘Rosebud, Rosebud…’. Guess what? Donating your fortune to the State of California erases your misdeeds from history. According to Bill, Willie was just a bit ‘Victorian’ (he campaigned FOR prohibition … Need I say more?).

Nonetheless, the ornery old bugger and his long-suffering architect Julia Morgan created a masterpiece of OTT marvellousness that puts John Symond’s eyesore to shame. And he had a zoo on the property. And he had a Hollywood mistress named Marion Davies who ended up loaning him $1.3 million when he borrowed himself into a hole.

I am going to digress for a minute because this is an exceptionally sad story. Davies, who was happily shacked up with Hearst for 26 years while his estranged wife lived on the East coast, was beside him as he lay dying in his Beverly Hills mansion. She was so upset at the time that the doctors sedated her and put her to bed. In the interim, Hearst passed away and his nasty offspring took him, and all his belongings, away to be interred, leaving only the photo of Marion that Hearst had on his bedside table.

When Davies awoke, not only was her partner dead, he was gone. Hearst left her a 51% stake in the corporation that she sold back to the kids the following day for the princely sum of $1. It was worth $130 million. So much for being a gold digger…

So sad. I want to make her bio pic. Digression complete.

Apologies for the lack of picture and subsequent formatting wackness. Me and the iPad are still circling each other suspiciously. Downloading images might be stretching the friendship.