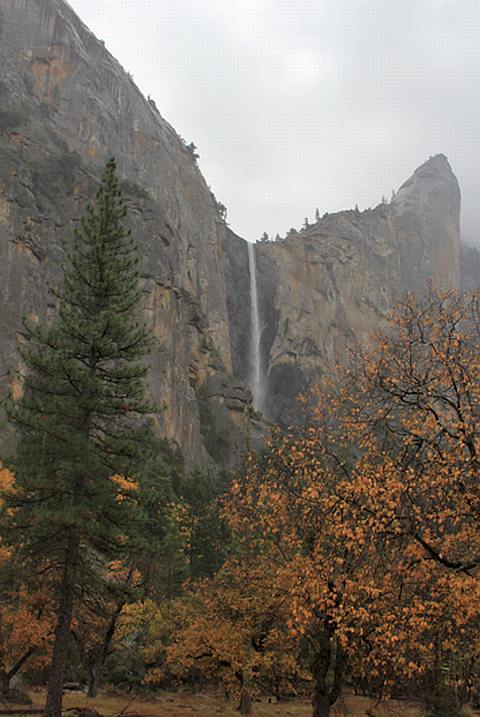 Nature has, once again, messed with my plans. The big idea was to drive over the Tioga Pass and down to Vegas via Death Valley (the driest place on earth – my inner-David Attenborough cannot get enough of that stuff). One small problem. National Parks closed Tioga Pass (the only road across the Sierra Nevada mountains) because it was RAINING.

The unfortunate precipitation situation also meant that we could barely see the staggering 10,000ft shale escarpments that flank the valley as you drive into the village because they were swathed in clouds. *sob*

This would not be such a big deal if Yosemite wasn’t a 14 hour detour from Vegas. The First Husband has started calling in ‘Emma’s Folly’.

Whining aside, Yosemite was resplendent with Autumn colour and threaded through with silver rivers that run in the valleys. The giant sequoias are suitably big and ancient (although it’s impossible to tell by looking at them. I love trees and I still look at them and think, ‘mmmm, trees’).

Yosemite is definitely worth a visit because, at the very least, it will give you a legit reason to wear your Kathmandu outfit and prance about taking arty photos of leaves. Just try to go during the dry season.