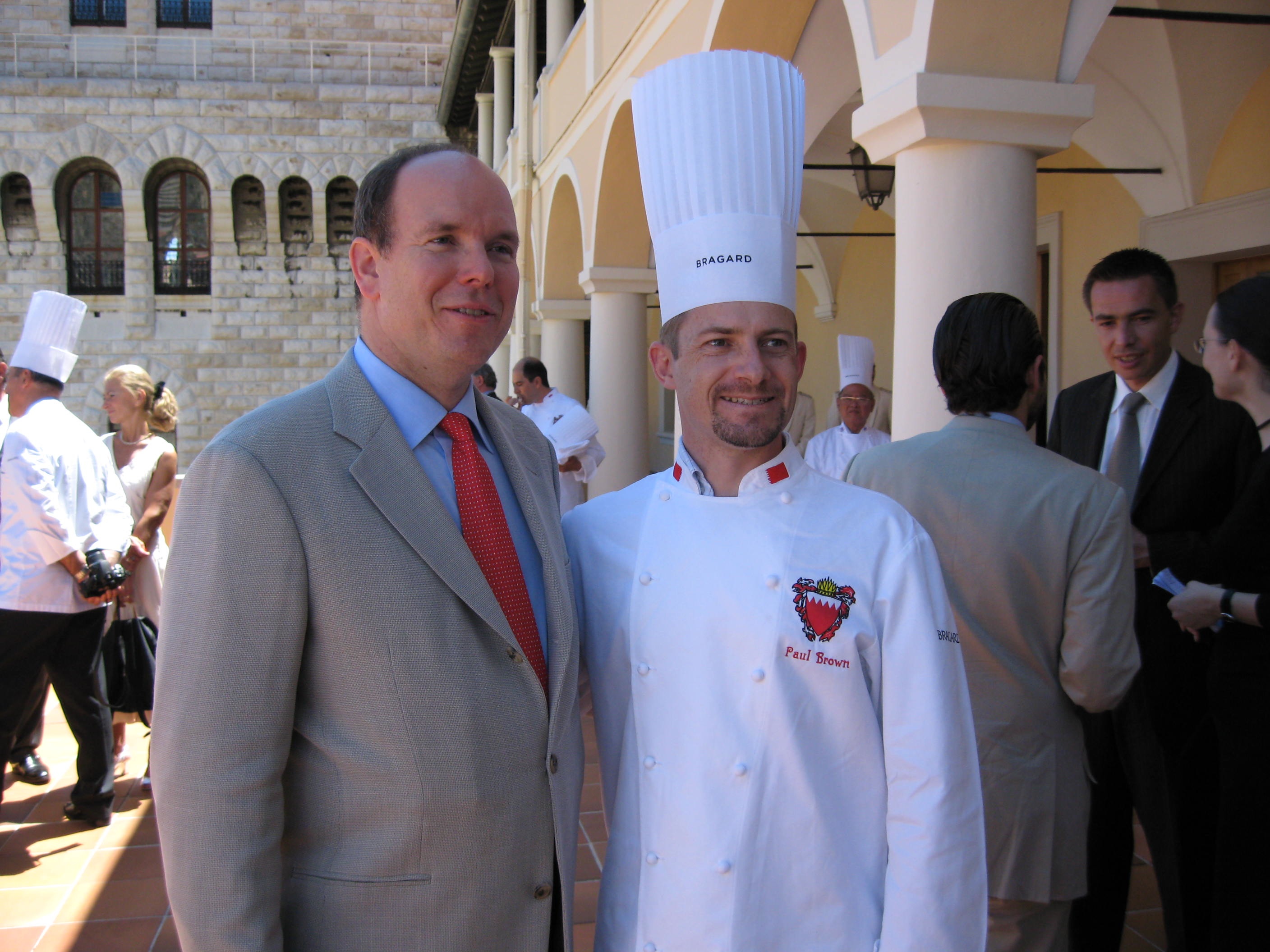 The King and I: Working for the King of Bahrain Paul Brown, the Executive Chef at Stamford Grand in Glenelg spent five years working for the King of Bahrain. Here’s his story:

1. How on earth did you wind up working for the King of Bahrain?

To cut a long story short, I was head hunted for the position. The King asked the General Manager of Palaces to hire an Australian Executive Chef as he was very impressed with the Crown Prince’s Executive Chef who was also Australian. The process took some time and finally after many months of security and reference checks, the job was mine and they wanted me on the plane yesterday. After a rushed trip to Bahrain, I was welcomed by the General Manager of Palaces who told me His Majesty was leaving soon for a trip out of the country and they would be back in contact with me soon.
After waiting at the Sheraton for nearly two months, I finally got a call and the next day started work at the palaces.

2. Did you ever meet the King? What was he like?

Yes, I met the King many times. I would always put myself in front of any buffets to answer any questions regarding the food.

I didn’t remember very much the first time I was shown through a palace because there was just too much to take in.

The King has many palaces through out the world and spends most of the year travelling to and from properties in Morocco, London, the south of France and the Sharm in Egypt, just to name a few. There were many palaces in Bahrain so at different times of the year he would spend time there too.

I spent a lot of time creating and updating kitchens around the world. My legacy was the construction of the Safriya Palace kitchens which were constructed with no expense spared.

The King also owned a 350 ft sail boat and 10 state room motor cruiser so these were considered ‘palaces’ as well.

We [Paul, his wife and later, their son, Jordan] lived in a three storey villa, with a gardener and a maid.

I love countries with character and Bahrain sure had that! I have never seen such patriotic people. We were welcomed by everyone and amazingly enough I felt more secure in Bahrain than I do in Australia. There is no petty left, muggings for money or gangs roaming the streets as crime is dealt with by harsh, over-the-top penalties. A couple of boys were caught breaking into a house when we were there and they were given life inprionment. You may say this is a little harsh but it certainly cuts out the crime.

6. What was the King’s favourite meal?

When I started at the palace he didn’t eat very much Western food. He would normally have a buffet and some service platters of mainly Arabic food. I started doing a typical European style degustation menu for him (six course meal  which he loved but called it his ‘diet food’. His friends thought that this was just not enough food so they decided that he would keep having the six course meal but would also have the buffet and service platters too.

7. Can you tell us a bit about your experiences in the Chef de Chef group? What was Prince Albert like?

The Club des Chef des Chef is the most elite chef club in the world – to join you have to be an Execuitve Chef to a King or the Head of State for a country. The Club would meet once a year and was invited by a different Head of State to visit their country. The trip was always fully paid for and included our partners aswell. My last trip – which would have to be the highlight of my career – was being shown through France and Monaco by Prince Albert. We spent 12 days travelling and eating at the best restaurants in France and Monaco. It was the 30th Anniversary of the Club so we returned to where the first ever meeting of the club was held at Paul Bocuse’s restaurant in Leon, France. It was a humbling experience to hear Paul Bocuse say in a speech after dinner that he has never, ‘…felt more humbled than now, cooking for the Royal Elite of cooking.’ We also had the privilege of meeting the grandson of Auguste Escoffier, the creator of modern French cuisine as we know it.

A cocktail party at the palace and a Gala dinner at the Hotel de Paris were topped off by a firework display over the water. We were also inducted into Le Torques Blanches as lifetime royal members of their prestigious club based out of France.

8. What were the best palaces in the group?

Safriya Palace would have to be at the top of the list only because that is where I spent 80% of my time. I loved walking through the Chinese gardens, shooting range, golf course and stable area before reaching the beach and private island just off the coast. The grounds were the approximate size of a suburb.

I also built the kitchens in one of the king’s sons’ houses. He was 14 at the time and unfortunately died a year later in a motor vehicle accident. It was rumoured that they spent close to half a billion dollars building this house. The kitchens were the size of any five star hotel’s and were linked to the main house by an underground road which comes up under the centre of the house.
9. What is the major challenge that working for a royal family presents?

Logistics! I would get a call at 3am in the morning saying, ‘We are off to Morocco tomorrow, followed by a couple of days in Sharm – make it happen.’

I wouldn’t sleep from that moment on until we returned because it was such a stressful exercise. I did everything from organising staff and making sure everyone was accounted for, to organising the meal arrangements for the His Majesty, the Royal family and their guests (usually around 50 people in the entourage), 30 flight crew, a large number of internal and external security (up to 500 people), doctors, communications people, drivers and staff. To make it really difficult, all the food had to come with us from Bahrain. Luckily we had our own planes but most of the time my staff would have to sacrifice their luggage so that we could fit more food on.

10. What is the major opportunity that working for a royal family presents?
Getting to meet interesting people. I have met a lot of Royal family members and world leaders. Meeting Michael Jackson was a memory and a half. He stayed in Bahrain for some time after his court case and yes, he did look like a freak. I met the good and the bad from past to present rulers, but most of all to all the good friends I have made along the way.

7 comments on “The King and I: Working for the King of Bahrain”