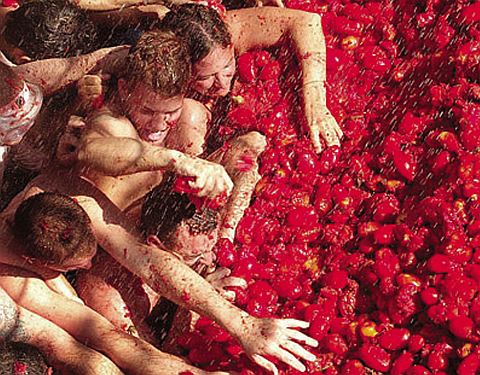 Top Four Weird and Wonderful Festivals of the World

I think I’m coming down with festival fever… it’s a nasty case, really. Symptoms include constantly feeling distracted at work (as I constantly refresh gig guides and line ups), poverty (with tickets over $100 a pop) and frustration (hurry up, hurry up…).

Here are some of the most quirky I have come across:

I love a lump of lactose as much as the next person, but would I hurl myself down a cliff for it, tussling for position with scores of other hungry punters? Er, maybe! Here’s what happens at the Cheese Rolling Festival: a guest roller starts the race by launching an eight pound wheel o’ cheese down a treacherous slope, while competitors all vie for first place, and the precious prize – the recently rolled cheese.

You say tomato, I say La Tomatina! This annual festival sees one small street in a tiny Spanish town, packed with over 20,000 people prepared to spend a solid hour slogging each other with tomatoes. Sure, the logic may sound loco but definitely loads of fun! Word of warning though; don’t pack your whites.

This rudie-nudie festival sees scores of participants drop their daks in honour of a decree issued 1200 years ago to dispel a plague. Today, thousands of men meet to mingle in nothing but giant nappies known as fundoshis, attempting to touch the anointed ‘Naked Man’ in the hopes of expelling any bad luck and enhancing good fortune.

Everywhere else in the world has New Year’s Eve, the Scots have Hogmanay! Aptly nicknamed “Snogmanay”, the stroke of midnight signals the chance to kiss everyone and anyone – no pair of puckers are safe. As for the next day, you can wash your partying sins away during the ‘Loony Dook’, a ritual sea swim. Brrr….

Tell me, my pretties, what are your favourite festivals? Is there a festival you would desperately like to go to? (For me it’s Day of the Dead in Mexico or Burning Man in Nevada)