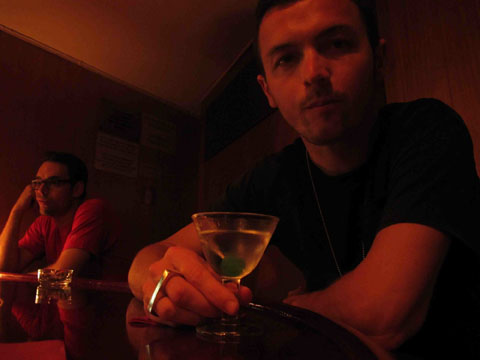 Favourite travel destination?: Berlin because, for me, travel success is gauged on the people I meet along the way. I try to shy away from tourist traps and generally won’t even visit the proclaimed ‘must see’ sites to a destination as I seek true community fun. Berlin’s social dynamic is quite unusual and I assimilate well into the wonderful culture they have there. Most of all, the people are generally very welcoming.

Worst travel experience?: Two and a half years ago my friend Chris and I caught a bus from Budva (Montenegro) to Dubrovnik (Croatia) which should have taken three hours. A well dressed, handsome young engineer from Kosovo was seated next to me and we began to chat about where I’d been on holiday and the conversation quickly diverged to the history of the region and some of the continuing hardships.

It was a sweltering Eastern European summers’ day and we were pleased to have the air-conditioning roaring aboard the bus when he warned me of the troubles he will face at the checkpoints to enter the EU. We queued for the first of two checkpoints and border security – a bunch of heavily armed, war-torn soldiers – insisted that the driver of the bus switch off the engine, no air-conditioning. After an hours wait they entered the bus and began checking passports, they gave a quick glance at my Australian passport and without even a hint of suspicion moved to the gentlemen sitting next to me. He got plucked out of the bus and we waited, sweating it out inside the bus whilst the poor guy had these soldiers search and interrogate him.

The heat inside the packed bus became unbearable, so much so that panic and claustrophobia began to set in amongst the passengers. The soldiers insisted that nobody get off the bus and that the engine stay off. Finally the young man was allowed back on and we continued our journey whilst celebrating the simply luxury that is cool air!

We were now nearly four hours into what should have been a short trip and there were no signs of the coast as we approached another checkpoint. Once again, the same torturous procedure took place as we were plunged into the hotbox and the young Kosovarian professional was pulled off the bus for interrogation. After half an hour, the heat became insufferable; a number of passengers including myself began to freak out. We attempted to get off the bus but the soldiers pointed their guns at us and told us to get right back on the bus – we were quick to turn around.

Another twenty minutes passed and the young Kosovarian who’d been sitting next to me returned to the bus with tears in his eyes. As the bus pulled away on it’s last leg back to the port of Dubrovnik, my neighbour gave insights in to the lives of those in the region and the racist world that still exists between each of the neighbouring countries. He’d only been strip and cavity searched, interrogated and verbally abused because of the label on his passport, a sad truth about the borders that still exist between a number of very similar countries.

Best tips for beating jetlag?: Hmmm, have an all-nighter either side of your holiday.

What is the one thing you don’t leave home without?: Earplugs and eyemask – you can sleep ANYWHERE!

Do you stay in touch with people while you’re travelling?: Absolutely, I travel with many of the people I met on my last holidays by rendezvousing in foreign holidays. I may not have seen them in person for a year or two but we stay in touch via Facebook and make plans to conquer a summer holiday together … So much fun!

Best meal you’ve ever had while travelling?: Oooh, that’s a toughie! My holiday often combines late nights, good food and great bars so there have been many but if I had to recommend one I would suggest Picnic Restaurant in Barcelona. Some friends and I were dining there a year or so ago and we couldn’t help but feel that for some reason, the contemporary Spanish cuisine had some sort of Australian interpretation behind it. Now I realise this is au contraire to my usual travel mantra of seeking out the local experience but the food was unreal; fresh, adventurous and delicate without being too la-di-dah. Sure enough, the owner operator had lived and worked in Melbourne for a few years. Oh, and when you’re in Barcelona, I strongly recommend visiting the Boqueria [food] Market with a basket and intention to buy; the food is irresistible to go make a picnic of your own!

Best kiss?: Haha, she knows who she is …

Best/scariest/funniest drive?: I’ve only hired a car one whilst overseas and that went pretty well driving through Basque country however, there was a flight following that cruise that gave me a fright.

Now I’m not a nervous passenger aboard planes. In fact, I quite enjoy ‘the magic of flight’, as Sir Richard B eloquently puts it. Sticking to my usual policy of having a bit of a late night romp the night before a long haul trip (read-on to hear about my biggest ‘WOW’ moment), we made it to the airport in Bilbao and as soon as my bum hit the seat in the aircraft I was sound asleep, right through takeoff. I began having a pretty relaxed dream about being aboard a plane with two friends from Australia, one of which was trying to make a call from his mobile phone. I tried to explain that you can’t make calls from inside the plane whilst the plane was trying to land and he argued that it, ‘was fine, it’s the new A380, you can make calls from the plane, see?’, as he showed the call connecting.

Snapped from my dream I wake up airborne in my seat, the loose seatbelt stopping me from hitting the roof of the plan. My brain switches to full throttle and time seems to slow as I look around the cabin over the top of the seat to the sheer fear in peoples eyes and wailing noises as the plane plummets; I wake up and the plane is going down, F%#K. My hands project sweat as the realisation hits home that this is it, but when I look out the window the horizon is still as it’s name suggests, horizontal. I felt calm again as I recognise what’s happened. Whilst I was deep in my dream the plane had come across some clear air turbulence (CAT) in the form of a low-pressure trough and dropped 400 feet in a few seconds, to me what felt like 30 seconds. No one was injured, just a few people sick but I honestly thought that was the end. Intense.

What has been the big WOW moment of your travelling life?: Hmmm, I would say this last break had a pretty special moment and it’s pretty fresh in my heart so observing a lion in the wild, soaking up Shibuya and swimming at midnight in Stockholm in summer can all sit to the side for this accolade.

My last night on holidays before the long flight home was spent in a small city in the North of Spain called Vitoria-Gasteiz. It was by utter accident that we happened to be passing through their town on the most special night of their year – the first night of the Virgen Blanca Festival or Fiestas de La Blanca. To be part of a Spanish community festival when the entire city comes together is truly special as there is seemingly little social hierarchy often observed in other countries and the energy is just unreal.

Check out this video featuring a city dousing itself in cheap champagne and singing a song about Celedon (Theledon), ‘A man who built a small house with a window and a balcony’ – cute! Those being (essentially) the sum of the lyrics.

What is your number one travel tip?: Wherever you go, be polite, visually identify locals you think you may connect with and engage them for tips on where to go and what to do. The number of times this has resulted in a wonderful authentic experience I couldn’t count on two hands – not to mention the friends I’ve made.