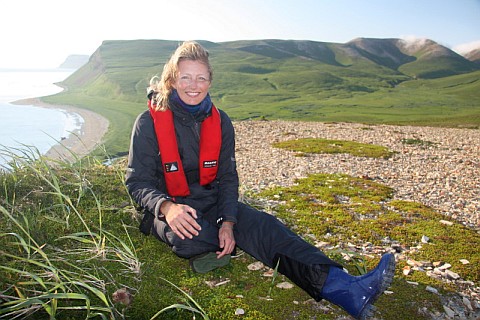 It’s not every day that I get to profile one of Australia’s top travel journalists but today, my friends, is that day.

I am very pleased to introduce you to Louise Southerden, ASTW Travel Writer of the Year in 2008 and 2009 and winner of Best Responsible Tourism Story in 2006, 2008 & 2009. She is a regular contributor to The Sydney Morning Herald, Australian Geographic OUTDOOR and Wellbeing magazine (among many others), and has written two books, Surf’s Up: the girl’s guide to surfing and Japan: a working holiday guide

In summary, Louise is extraordinary, not just in experience but in spirit. Here’s her story:

1. How long have you been a travel writer?

I’ve been making my living from writing and taking pictures for about 15 years now, though my first travel story was published in 1991 (almost 20 years ago!). It was called ‘A day in the life of an overlander’ and was about a 3-month trip I did across Africa in the back of an ex-army Bedford truck, which is still one of my all-time most memorable journeys. I remember feeling, when I first saw my name in print: wow, I’ve arrived. Little did I know that was just the beginning…

2. How did you get into this field?

I guess I slipped in through a side-window, rather than coming through the front door that is. I did psychology and zoology at uni (I have an Honours degree in Psychology) and avoided writing as long as possible. Then photography got me. After my first solo trip away I thought I’d try to get some of my travel photos published. I soon found out that I needed to pen a few words to go with them. At first that terrified me, then I remembered that I had kept a diary since I was 12, so I must have had a latent writing genie bottled up inside me all along. Anyway, I started writing and although it’s still hard work sometimes (‘hard writing makes for easy reading,’ someone once said). I love writing now, though I still love putting words and pictures together; that’s what I’ve most enjoyed about the editing stints I’ve done. Something else that helped me on this path was living in southern Japan for a year and a half; I found it incredibly liberating, the experience of living, and working and surfing, in a (very) foreign country and existing outside the rules a bit because you are an outsider. That gave me confidence to write about what interested me, in the way I wanted to write it, instead of what I thought I ‘should’ write to get published.

3. What is the best thing about your job?

Ooh, there are lots of things. I love the freedom of it, which is a day-to-day thing (being able to go to the beach before work and working the hours I want to) as well as a longer-term thing of being able to sail my own course in life. Or to not even have a course, that’s probably closer to the truth! Another great thing is having the chance to see places I never dreamed I would see with my own eyes before I started this work. But I also I love the simple simplicity of being ‘away’, stripping life back to its bare essentials – which happens on a lot of trips I do because they tend to involve hiking or kayaking or other nature-based things. And I love that having to produce something at the end of a trip makes you pay close attention to where you are and what it looks, feels, smells and even tastes like. Which brings me to the final thing I love: travelling with purpose. I love having a job to do, and doing it, on the road. This is hard to answer because everyone thinks this is a dream job – and it is in many ways, and I do appreciate the gifts it has given me. But let me climb over the safety barrier and say: I think there are a lot of misconceptions about being a travel writer. One is that it’s an endless holiday; it’s not. When you’re away, you’re working almost constantly, taking notes, taking photos, interviewing people, asking questions, thinking of story angles, gathering as much information as you can basically. And when you get back, you hit the ground running to write it all up as creatively and as quickly as possible so that you can get some income coming in – actually the worst aspect is the financial insecurity, and the general insecurity of not having a safety net under you much of the time.

5. Where are the most beautiful places you have ever seen and why?

Another tough question! There are so many beautiful places in the world. And beautiful moments in what might not be classically ‘beautiful’ places. Most recently, I sat in a field of wildflowers staring up at the granite wall of El Capitan in Yosemite National Park, California. Lord Howe Island is one of the most beautiful places I’ve ever been, on many levels, and so close to home. Mongolia is also beautiful in a very sparse and spacious way – the light on the steppe is incredible; there’s no doubting you’re in the middle of a vast continent, far from any sea. And the Arctic – I loved the towns perched on rocky headlands dwarfed by high peaks, and the ice fiord at Jakobshavn on the west coast of Greenland. I guess natural beauty gets to me more often than man-made beauty – I’ll probably change my mind when I eventually see the Taj Mahal.

6. Have you had any scary experiences on the road? If so, what were they and how did you ‘escape’?

I’ve been pretty lucky so far; the worst thing that has happened to me happened just north of my home in Sydney: a surfing accident that left me temporarily paralysed from the neck down a few years ago and resulted in a two-week stay in the spinal unit at Royal North Shore Hospital. My most common mishap is getting lost; for a travel writer I have a terrible sense of direction, probably because I’m always paying attention to micro details like the way the light shines on a street sign instead of more useful details like what the street sign actually says or in which direction I’m walking. 7. Is there any country or culture that you feel a particular affinity with? If so, what is it about that place and people that you love so much?

I feel a real affinity with Japan. When I lived there I almost felt Japanese some days and was always surprised to see photos of myself with my Japanese friends: we looked like we were from different planets. No wonder small children used to stare at me in supermarkets! And when I went back there a couple of years ago on a media trip I felt that same ease; it just feels very peaceful and I like the way the people treat each other, and that they seem to value your inner qualities instead of outer ones.

8. Is there anywhere that you have felt uncomfortably alien?

Hmm, whenever I’ve been in China I feel quite uncomfortable; I don’t really get Chinese culture or way of interacting, much as I’ve tried to. Chinese food is another matter…

9. What are the three things you never leave home without?

Apart from my dog-eared passport? Let’s see: my camera (Canon 450D SLR, with two lens and polarising filter), a notebook and pen, and a book to read when there’s no inflight entertainment (which happens on a lot of the airlines I fly with, like Vladivostok Air…).

10. What is the greatest lesson you have learnt through your travels?

I think travelling as a travel writer, has taught me (and is teaching me) to pay attention – not just when I’m away and ‘on the job’ but when I’m at home too – and to try to see life as it is, not how I wish it might be. Because I think that’s the starting point for true understanding. And to never stop wondering – we do live in such an incredible world.

Travel with an open mind and an open heart and don’t be afraid to be vulnerable. Travelling can be a practice, in a way, an opportunity to practice ‘don’t know mind’ or ‘beginner’s mind’ – because we’re not at home, literally or psychologically, and we don’t ‘know it all’, and that’s a good thing, a relief really. And put yourself out there – not in harm’s way of course but I think if you’re friendly to people and open to new experiences and don’t ‘know it all’, the places you visit will open up to you and you’ll have a richer trip for it. 13. What outdoor activities should everyone try at least once?
Is it too obvious to say walking? By that I mean everything from walking through villages and towns to trekking in mountains. There’s something about placing one foot in front of the other that really grounds us, I think, and brings us into contact with the place we find ourselves in, particularly after the unnatural act of international air travel. Camping too – real camping where you’re sleeping in a tent on a mat on the ground, in a sleeping bag; because it can wake us out of our man-made dreams and remind us that we live on a natural planet. And, because I’m a water-baby, sea kayaking and canoeing. You can fit more in a kayak or canoe than any backpack and it’s such a peaceful and low-impact way to see the world. Of course I have to say surfing too – it’s the purest form of play I know. But really, it’s great if people can get into the outdoors at every opportunity, any way they know how…