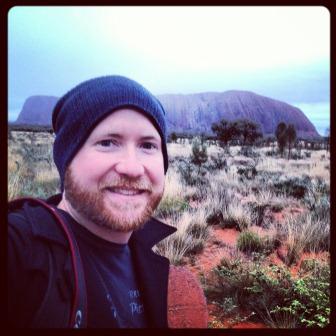 Where are you now?: At Victoria Falls Airport in Zimbabwe, waiting for a flight to Johannesburg.

Favourite travel destination?: It would have to be San Sebastian in northern Spain. I love that place. I’ve been four times and it never loses its appeal. It’s only a small city but it’s got everything that makes a travel destination great: rich culture, incredible food, great bars, beaches, and local people who are passionate about all of it. If you can spend a night bar-hopping and pintxos-eating in San Sebastian’s old town and not fall in love with the plac e… we can’t be friends.

Best meal ever while travelling?: I hate to be unimaginative, but any of the nights out I’ve had in San Sebastian would win. I’ve been to Michelin-starred restaurants there, which were great, but the real experience is the bar crawl. San Seb’s old town has about 250 bars in one square kilometre, and each has its own special pintxo, which is like an even smaller version of tapas. It’s a few mounthfuls at most. The range, quality and affordability of the pintxos is mind-blowing, and the atmosphere in the town is perfect for getting your booze on without going too silly. Eating is definitely not cheating.One food/drink people should avoid at all costs?: Little tip for first-time players: if you’re going to try durian, the Asian fruit that smells like a rotting corpse but tastes quite nice, don’t do it while you’re drinking beer. Something about that combination in your stomach will lead to a long night of making calls on the big white telephone. Trust me.

Best kiss?: I travel by myself a lot, so the best kisses are always from my girlfriend when I get home.

Best/scariest/funniest drive?: This for me was all wrapped up into one, on a trip from London to Pamplona when I was working as a cook for Top Deck. We were ferrying a large group of drunken idiots down to Spain for Running of the Bulls, and it was eventful, to say the least. Our driver, Toot, had never driven that route before and kept getting lost. Every now and then I’d notice that we were driving around in circles, so I’d go down to the front of the bus, and sit in the aisle next to Toot. “Where are we?” He’d pause for a while, then glance over: “Dunno, mate.” We also sold beers on the bus as a way to make some extra cash, which meant the passengers all got really drunk and had to use to the onboard toilet a lot, which meant it filled up, which meant I had to “dump” it while we were driving down a French motorway. To the people driving behind us: Je suis désolé. Top Deck was also banned forever from two campsites after that trip because our passengers went completely mental and destroyed the place.

Best/weirdest/worst place stayed?: I’ve been lucky to stay in some pretty fancy places, but the bad ones are always the most memorable. I stayed in a dodgy backpackers in Istanbul a few years ago, and wound up sharing a dorm with a bonkers Canadian guy who tagged along with me one night and confessed his criminal past (he’d been in jail for car theft). Great. Anyway the next night he ended up taking a whole lot of pills at a club and came back to the hostel at about 7am freaking out, shaking me, going, “We gotta get outta here man, the dude who runs this place is chasing me, let’s go dude!” I decided to stay in bed.

Biggest ‘wow’ moment in your travelling life?: So hard to pick just one, so I’ll go with the most recent. A few months ago I was in Iran, in a desert city called Yazd, and was sitting with my friend one evening on the rooftop of our little hotel, watching the sun set over the dunes on the horizon, and listening as the calls to prayer rang out from the minarets nearby. There must have been 10 or 11 mosques around us, which created this haunting chorus. It was one of those moments when you just can’t believe that you’re really there, experiencing it.

Advice for aspiring travel writers?: Find yourself a niche. Don’t just write about “travel”. Be more specific – make yourself an expert on a certain style of travel or sector of the industry. Write about adventure travel, or budget, or luxury, or cruising, or singles, or gay… Whatever floats your boat. And don’t worry about your actual level of expertise at the moment – fake it till you make it.

How important is learning the local language?: It would be fantastic to be able to speak the language of every country you visit, and it will certainly improve your experience, but it’s not necessary. For the sake of courtesy you should at least learn a few greetings and basic phrases, but the reality for English speakers is that our language is everyone else’s second one – we get it pretty easy.

One thing you never leave home without?: A pair of thongs. Even if you’re going to Siberia, they don’t take up much room and they always seem to come in handy.

Next destination?: I’m off to Papua New Guinea in about a week – can’t wait.