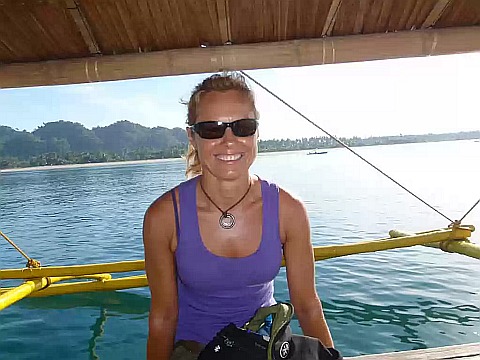 Favourite travel destination?: That’s a tough one. I don’t have a favourite destination, but I do have several places that are memorable because of the adventure, the people I met and/or travelled with. Tibet is incredible. It feels so close to the heavens, and very spiritual with all the temples, prayer flags and pilgrims. The landscape is desolate and endless, you wonder how anyone could live there. A world away.

Worst travel experience?: Travelling around Vietnam on my own. When you are only willing to pay $5 a night for accommodation (which in 2005 you got a very decent room), you aren’t favoured by the locals. I had booked an overnight bus three days in advance and was picked up enroute an hour outside of a large town. The staff had the audacity to call me at the designated café stop and tell me that there wasn’t a seat for me and I would be sitting in the aisle. I slept on the aisle floor for twelve hours and probably ended up having the best sleep out of all the other travellers on board.

Best tips for beating jetlag?: Get plenty of sleep.

What is the one thing you don’t leave home without?: My journal, a good book and my camera.

Do you stay in touch with people while you’re travelling?: I use email and facebook, but not often especially if I am on a long trip adventurous trip, it all depends on the convenience as well. Less is better.

Best meal you’ve ever had while travelling?: Sitting on a tiny stool outside a ‘hole in the wall’ restaurant in a hutong in Beijing. We were sharing the table with a group of locals and just grinning at each other. We had a massive bowl of scrambled eggs with onions and tomatoes and a bowl of rice for $2. It was exquisite and authentic! So we spent several evenings at the same place.

Best kiss?: All the ones I fantasised about. I have found myself in a lot of amazing and romantic places, but alone!

Best/scariest/funniest drive?: I met up with five other travellers and hired an old Russian van and driver to take us around Mongolia for ten days or so. The driver ended up being not a nice man, and only spoke to the one male in our party. Us females understood pretty quickly that he didn’t like women. When the only male and his girlfriend left us after five days we were terrified. The driver became even angrier and would drive dangerously fast across the Mongolian steppes, I could almost see the anger as smoke coming out of his ears. One day we were so frightened we demanded he take us back to Ulaanbaatar a few days early, we wanted him out of our lives! We were furious with the guest house host for organising him for us. Apparently he had a reputation for acting like this!

What has been the big WOW moment of your travelling life?: Watching the sunrise at Annapurna Base Camp, then clouds rolling in to the valley like a jug of spilt milk.

What is your number one travel tip?: Leave the phone at home. Why be attached to reality when you are going away to escape it? And don’t plan your trip too much so you can leave room for the adventure to unfold.