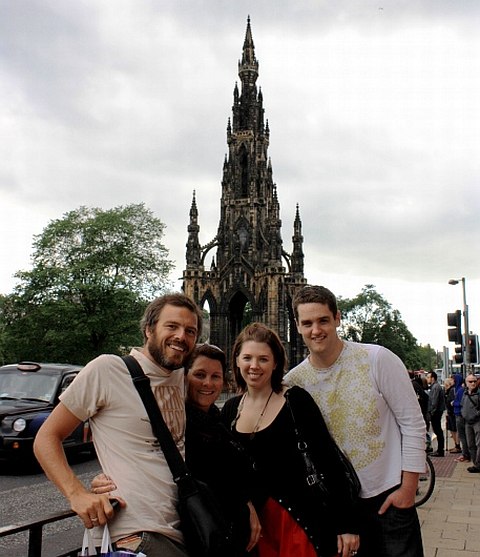 Chloe Barnes is an SEO specialist living in Edinburgh, UK. Read on for her tips for life in the ‘Fringe’ city.

Occupation: I work in Search Engine Optimisation for a Digital Media Agency.

Where do you live?: Edinburgh, United Kingdom.

Why did you move there?: I’ve always wanted to live in the UK, though I’m not sure why. I like the cold, and I have a British passport, so it just seemed like the easy choice. Most people in my situation seem to move to London for a while, and I wanted to do something a bit different. London is great, but Edinburgh has a completely different vibe. Plus, the men wear kilts!

What do you love about your town/city?: I love the gothic architecture in the old town, and how the city is a manageable size – but it still has plenty to discover. I LOVE the Edinburgh Fringe and how the city comes alive in August – it doubles in population, and everything stays open really late.

What is the most frustrating thing about your town/city?: I think it has to do with the snow – they know it’s coming every year, and yet the city completely shuts down whenever it snows. The buses and trains stop, the airport closes, and the mail service stops delivering (everything except bills, that is). People panic-buy food from supermarkets because they don’t know whether anything else will get delivered, and you can’t get in or out of the city. It’s incredibly frustrating – they haven’t even worked out how to insulate houses properly, so your gas bills triple during winter! Super annoying. I lived in Sweden for a while four years ago, and they manage everything without batting an eyelid. I don’t know why they can’t just sort it out and actually deal with the snow, rather than freaking out when it arrives.

What is the predominant faith in your area?: People here seem to worship alcohol more than any specific faith – unsurprising, as the Scots are known for their drinking culture (which is large, and plentiful). I’d hazard a guess and say it’s Christian or Catholic, but really religion doesn’t seem to play a big part in people’s lives over here.

How does it affect your day-to-day life?: It doesn’t, really. Although the drinking culture certainly does – there are a lot of areas where people, especially underage people, congregate to get drunk and generally cause trouble. This can be difficult when it’s happening right outside your building while you’re trying to sleep.

Please describe typical local food: Ahh, haggis. Yes, people actually eat it – and it’s really not that bad. A typical Scottish breakfast is egg, sausage, hash browns, black pudding, and occasionally baked beans too. It’s heavy, to say the least. Basically, Scots will eat everything, and don’t seem to be too fussy about whether or not their diet is healthy.

Are there any major attractions in your town? If so, what are they?: Edinburgh Castle seems to be the big one. We also have the Fringe Festival, and the Edinburgh Military Tattoo, which seems to draw a big crowd every year. Hogmanay (New Year’s Eve) here is also massive. So, we don’t really have ‘attractions’ so much as we do events that bring in big crowds. Most of the attractions are actually dotted all over the country – with the lochs and the highlands just around the corner.

What do the locals do for fun?: They drink! Lots. It’s the only place I’ve ever been where the drinking culture truly rivals that of Australia. It’s certainly an interesting place to live, especially on a Saturday night. I suspect that most people do it for fun, and to keep warm – because it’s bloody cold here. Other than that, there’s not a lot that sticks out – Edinburgh is a pretty quiet city in terms of its attractions.

Any tips or advice for people visiting your area?: Line your stomach! You’ll thank me later.

Not only is Chloe Barnes smart and beautiful, she is also a fellow travel blogger. Check out her blog Camping in Heels here.

If you enjoyed Chloe Barnes’ Foreign Correspondent, click here for another one.