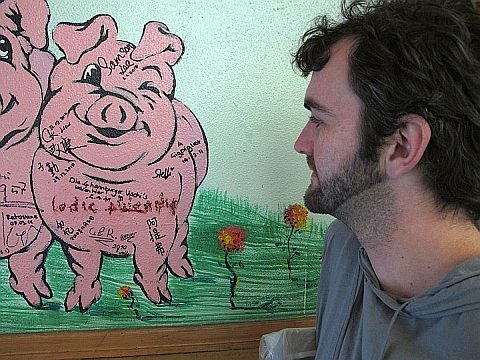 Favourite travel destination?: Mmmmm I like the travel nearly as much as the destination. Let’s say New York. Or Paris.

Why?: New York: ‘Cause it’s all there … everything. Nothing you can’t do and nothing you can’t be. Paris: Because nothing is there! It’s just huge city of food, wine and walking. I never think business when I’m there.

Worst travel experience?: Just last year, on a tour that didn’t want me on it … Not much worse than sharing a tour bus with a group of people who are on a totally different wavelength to you.

What happened?: Nothing … nobody spoke. Nobody said anything. We just spent 24hrs a day for 6 weeks with no one wanting to be there.

Best tips for beating jetlag?: I just pretend it doesn’t exist … really. Just stop talking about it, stop thinking about it and just have a day. Just like you would after a big night (you guys have big nights too right?). If you don’t talk about being ‘jetlagged’, you won’t be. You will just be tired which is totally fine

What is the one thing you don’t leave home without?: AMEX and my Macbook.

Do you stay in touch with people while you’re travelling?: Skype makes me physically angry. I hate it. I try to stay in touch but at the same time, I don’t like to be always ‘touching base’ or ‘checking in’. I think that text and twitter are great for just letting people know you exist, without loosing the moment/ place that you are in.

Best meal you’ve ever had while travelling?: Sooooooo many! One that sticks out, maybe not the best food ever (though not far from it), but the best experience, was at Le Express, the French diner in midtown New York. It was nearly 2am, we had landed on a Tim Finn tour not long before midnight, so by the time we got to the hotel (Gramercy Park), it was way late, and having just got off the plane from London, I was hanging for a past a… asked if there was any chance of anywhere (not expecting much), and the concierge was like, ‘Of course, there is Le Express just around the corner on 20th’ and it was just what I wanted. And amazing in everyway. At 2am in the morning! Only in New York.

Best/scariest/funniest drive?: Christmas night a couple of years ago, having just had a huge day in Bali with Athron, one of my artists (who is based there) and all his friends. Riding a motorbike home at who knows what time, in the full-on tropical rain, girl on the back of the bike, not in a state to be in control of a motor vehicle.

What has been the big WOW moment of your travelling life?: Being taken to a party in New York – this is probably 10 years ago now – certainly before 9/11. We jumped in a cab with my friend Janelle, and went to the address to meet these other people who had invited us. Get out of the car down on the wharf, go through metal detectors only to discover that the party was ON THE FLIGHT DECK of the INTREPID, an aircraft carrier that’s home is pier 86 in Manhattan. Standing on this huge machine, planes lined up one side, DJ at the end of the runway, and the New York skyline (including the Twin Towers) behind him.

What is your number one travel tip?: Be cool, honey bunny, be cool.

About the photo: This photo was taken earlier this year, in Cologne, Germany. I was on a couple of days off on this epic European tour, drinking beer and generally having a good time in Germany, and of course wanting to try real Bratwurst. I went into what looked like a great little spot and it turned out that to be a little pig shrine. The guy cooking was lovely. I told him about my company Gigpiglet and showed him my card. He was so excited to have a ‘pig’ from Australia – apparently he had people from all over the world sign the pig on the wall, but never someone from Australia, so it was perfect that the gigpiglet was here to do it..