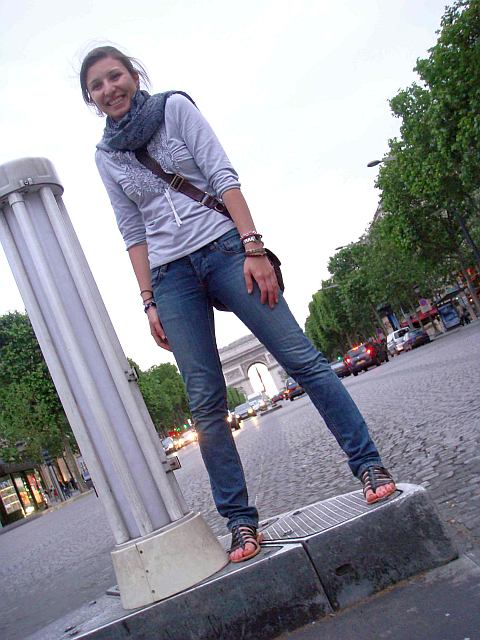 Favourite travel destination?: I loved Paris, Switzlerland and Santorini but my all-time favourite place has to be Lebanon. My parents are Lebanese and I have been there twice in my 24 years. I am hoping to take my Anglo-Saxon man there soon. Before the civil war in the 1970’s, Lebanon was known as the Pearl of the Orient and the Paris of the Middle-East. You’d think its often shaky political climate would change that, but it doesn’t. There’s always heaps of tourists flocking there to enjoy its amazing mix of culture (both westernised and traditionally Lebanese), great food, party atmosphere, adventurous streak, ancient history (Roman temples, and Jesus made his first miracle at Cana in Lebanon) and its mediterranean edge. It’s amazing because you could be watching the sunrise from the inside of a club (with a rooftop that opens), lazing on the beach that leads the mediterranean sea, scouring Roman temples to gods like Jupiter, and then making your way up to the mountains for a ski session. Last year it was named the party hot spot of the year by the New York Times, but I love going there to laze about in the village where my parents grew up, where old Lebanese customs are still in place.

Worst travel experience? Ironically, it was also Lebanon. I happened to be trapped there in 2006 when Hezbollah kidnapped those Israeli soldiers and Israel bombed the country. Thankfully we were evacuated, but it killed my mum to have to leave her parents after seeing them for such a short time for the first time in 11 years. I hate that there’s alot of foreign interest in Lebanon that is not in the best interest of the Lebanese people.

Best tips for beating jetlag?: Drink heaps of water, sleep as much as you can (eye masks, ear plugs and pashminas are the best) and concentrate your energies on the experience that you’re about to have to avoid getting cranky.

What is the one thing you don’t leave home without?: Rosary Beads & a St Christopher Medallion. I get scared at anything and everything when on a plane, so my rosary helps me relax as I meditate and St Christopher is the patron saint of travellers, so the medallion has a short prayer on the back that I say when feeling particularly frightened on a flight.

Do you stay in touch with people while you’re travelling?: I use travel cards. Email and Facebook are a treat. I once tried mobile roaming, and wound up with a phone bill the price of a Louis Vuitton bag. Not cool.

Best meal you’ve ever had while travelling?: I don’t think it counts as a meal, but the macarons at Laudree and the Creme Brulee in Parisian cafes were what my sweet tooth dreams were made of.

Best kiss?: I’m hoping it’s still ahead of me, like on a private gondola ride in Venice or something.

Best/scariest/funniest drive?: Not long ago, I had a conference in Canberra. My boyfriend had the crazy idea that he’d drive me there. For three hours we laughed and fought so much and still came out more in love than ever. Those are what great drives are made of. However, I am looking forward to a road trip with my girlfriends more than anything!

What has been the big WOW moment of your travelling life?: The Santorini sunset no less. I loved being on the volcano there as well.

KEEP ON READING EVERYONE … Sarah has a question for you!

‘I am looking to go with my soon-to-be husband to Europe next year (en route to Lebanon). I can’t decide if we should do a Topdeck tour or a Europe by rail independent adventure. We want to go to London, Paris, Amsterdam, Monaco, Berlin, Salzberg, Vienna, Venice, Budapest, Prague, Auschwitz, Brugge, Krakow, Warsaw, Rome, Venice, Pompeii then Greek Islands. There’s no Topdeck tour that does all these so I’d have to mix ‘n’ match with things. What do you think?’

Does anyone have any experience of these tours? Can you help Sarah? I am ashamed to admit that I have never been to Europe! Add your answers to the comments section below … thank you!